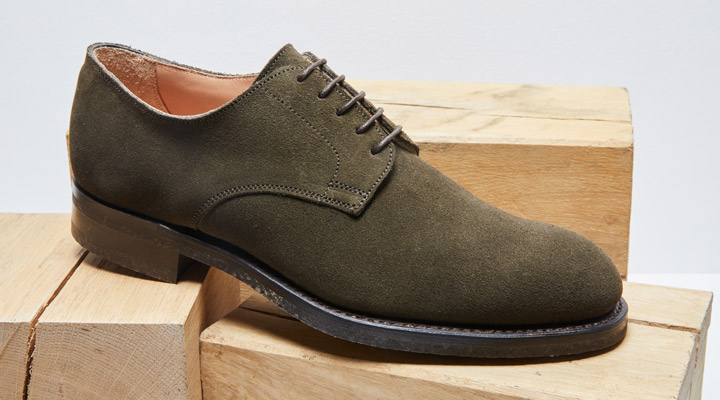 Derby shoes can be seen everywhere and are an inclusion in the vast majority of people’s shoe collections, spanning across all formalities. Understanding the benefits of this particular style is of utmost importance for anyone looking to build a solid foundation of footwear.

At Cheaney, we believe in expanding your arsenal of sartorial savvy. So with that said, let us fill you in on all things to do with these classic kicks with this: a guide to Derby shoes.

THE DERBY – A SHORT, CIVIC HISTORY

The history of the Derby (sometimes referred to as a Blucher or Gibson) is one best characterised by functional and comfortable adjustments made to another classic – the Oxford. In the early 19th century, the Oxford was said to be a design developed by students of the university who rebelled against wearing high boots. The Derby was a tweak introduced to those who, in turn, felt that the Oxford was restricting.

The Derby’s lacing design is where the most identifiable difference lies: The Derby features facings (where the laces go through) that are stitched as separate pieces on top of the vamp, as opposed to sitting flush like an oxford.

Having this space across the top made the Derby more forgiving and thus more suitable for those who were on their feet a lot. This ranged from soldiers of the Napoleonic war to the metronome of society – the postman.

Since these innovations, the Derby has taken on many more tweaks and modernisations, from brogues to chunkier soles.

WHY GO FOR A DERBY?

Going for a Derby over an Oxford is an astute move for a few reasons. Whilst the Oxford is a more traditional and formal choice, you can still achieve prime smartness with a Derby. It isn’t inaccurate to call Derby shoes the more casual relative of the Oxford, but this doesn’t mean it can’t be dressed up. What it does give you is a versatility and casual edge that its more formal counterpart can’t necessarily do.

Derbies are the ultimate transitional lace-up. They can easily go from being paired with a full (or broken!) suit to tailored shorts for a contemporary minimalist look. A good pair should be included in any capsule wardrobe.

This versatility in styling and the ability to easily modernise their appearance should leave you with little reason to forego a Derby.

HOW TO CHOOSE THE DERBY FOR YOU

Bringing these aforementioned elements together make for a presentation that is slightly more utilitarian and a bit less formal. Any perceived loss of formality is more than made up for the quality and good-looking leather that Derby shoes should always be fashioned out of. The Derby isn’t only a step towards sophistication in men’s footwear – plenty of ranges of women’s footwear also include desirable Derby collections!

CAN A DERBY BE A BROGUE AS WELL?

The easy answer is yes. A Derby refers to the lacing style. In a similar fashion, the brogue refers merely to the kind of decoration that occurs on a shoe. A Derby can easily appear in the form of a brogue if it has that distinctive perforated detailing characterised by a brogue – as long as it retains that open lacing system. Derby brogues are just as aesthetically pleasing as their lesser-detailed brother and are a more casual option.

Lee Child’s book ‘The Hard Way’ a Jack Reacher thriller features a description of our very own Tenterden Derby Brogue, which has since been updated to the Tenterden II

“His shoes were bench-made by a company called Cheaney, from Northampton in England. The style Reacher had chosen was called Tenterden, which was a brown semi-brogue made of heavy pebbled leather. Size twelve. The soles were heavy composite items bought in from a company called Dainite. Reacher hated leather soles. They wore out too fast and stayed wet too long after rain. Dainites were better. Their heels were a five-layer stack an inch and a quarter thick. The Cheaney leather welt, the Dainite welt, two slabs of hard Cheaney leather, and a thick Dainite cap. Each shoe on its own weighed more than two pounds”.
– Found on page 234

VARIATIONS ON A THEME

Besides the ever-recognisable brogue detailing, a Derby can also differ in terms of upper material. Suede derbies are the ultimate in comfort, whilst smooth leather gives a refined look and grain leather gives a rugged edge to the shoe.

As well as the lace-up shoe, the Derby may also refer to a variation of a very suave-looking boot. The same principle applies here: the Derby boot will have open lacing but will have more eyelets and cover the ankle and our available for both Men & Women

If you’re at all familiar with 2014’s stylish film ‘Kingsmen’ and all of its sartorial swagger, you’ll be aware of Harry Hart. Hart is the supporting character wonderfully played by Colin Firth. He also erroneously calls Oxfords ‘any shoe with an open lacing’, which you’ll now know is a little wide of the mark.

Harry Hart gets one thing right with his message to the impressionable Eggsy is that ‘manners maketh the man’. Taking heed of Harry’s wisdom, we think it’d be incredibly rude not to add a dashing pair of Derbies to your wardrobe.

Filed Under: Guides & Information
How to lace shoes
Origins of a Spectator Shoe