Oxfords vs Brogues — a guide 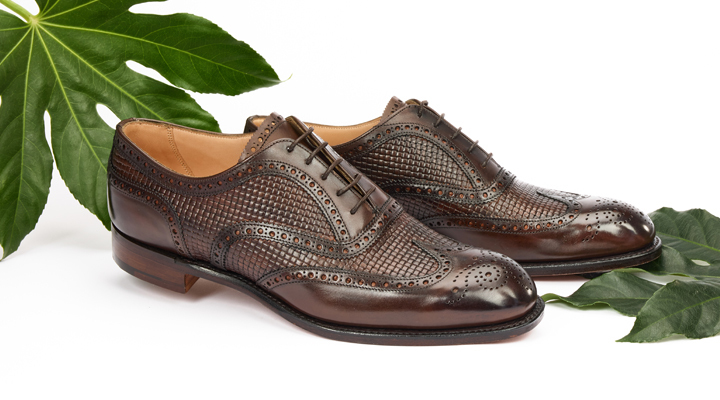 What are the differences between Oxfords and Brogues?

Choosing a formal shoe can be a challenge when one knows nothing about shoes, but we are aware that not everyone knows their Oxfords from their Derbys, their brogue from their Monk shoe, and we wanted to talk about one of the bigger questions people often ask themselves: what is the difference between an Oxford shoe and a brogue?

What is an Oxford shoe?

Let’s start with the Oxford shoe. These classic shoes are characterised by the shoelace eyelets being under the vamp, or upper part of the shoe; a feature often called “closed lacing”. This design feature creates a slim-fitting shoe that allows the leather upper to close tightly to the foot.

The name derives from their popularity at Oxford University, and this style of shoe did not make the trip across the Atlantic until the 1800s, where it is often referred to as a Bal-type — as opposed to “Blucher-type”.

What is a brogue?

Broguing is the term used to describe the pattern of holes that marks the outer leather of shoes. These decorative perforations were originally seen on Scottish and Irish boots that were used for outdoor or country footwear, though the wearing of a brogue has evolved over time to become appropriate in many instances.

These original Scottish and Irish footwear would be perforated to allow water to escape the leather. Today, the perforations are purely decorative.

How much perforation seen on the leather pieces of the shoe determines what level of brogue you are looking at. You’ll find full- or wingtip, semi-, and quarter-brogues most commonly, though shoemakers in the United States also created the longwing brogue, where the wingtip continues all the way to the heel.

The difference between Oxfords and brogues

Particularly due to a confusion of terminology, people make the mistake of believing that these are two entirely different types of shoe. To confuse matters, an Oxford shoe can be a brogue, and many brogues are Oxfords.

The key difference between Oxfords and brogues is that each refers to something different in shoe design. An Oxford only refers to the lacing, as we mentioned, and so whether you use the Oxford closed lacing or the Derby open lacing, you may still have broguing on the leather to make the shoe a brogue.

To make things simpler, we will show you examples of each type of shoe we’ve discussed here. Let’s start with Oxfords.

The Alfred is a capped Oxford, where the toe cap is visible, and this shows the closed lacing design that marks an Oxford well.

You’ll find that these Oxfords are perfect for that classic look. The Alfred uses the 125 last, a classic and versatile shape with an elongated almond toe. When you mention Oxfords, the Alfred or something very similar is what most men will think of; the best traditional shoe to have in your wardrobe.

To contrast with the Alfred above, we have the Berkeley Wholecut Oxford which features a single piece of calf leather for the whole of the upper.

The Berkeley is a clean, modern and sophisticated styled shoe with a refined six eyelet closing lacing design. Perfect for formal and professional wear, the Berkeley has no decorative perforations and is not made from separate pieces of leather.

To compare particularly well against the Berkeley design, we have the Arthur III D Oxford brogue. This is a shoe that still uses the Oxford closed lacing system and uses the perforations of the brogue to create a stylish and timeless classic.

Still a classic and professional shoe, but the brogue is more eye-catching than the Berkeley.

To compare to the three Oxfords we’ve seen already, we have a brogue that is not an Oxford. The Derby is best thought of as the opposite to an Oxford, with an open lacing system featured instead.

As you can see, the broguing pattern is similar to the Arthur III from above, but the main difference is the visible eyelets in the upper. This is a robust shoe that is a go-to casual option for those seeking a wearable style.

To cap off the visual exploration of the differences between Oxfords and brogues, we have the Tenterden II Derby brogues.

As you can see, this shoe has less perforation along the shoe, marking this as a semi-brogue. Referencing a Victorian style, this shoe is a little more casual than the other examples we’ve seen. It’s extremely versatile still, and the Derby style of lacing suits a wider foot than Oxfords might.

So to recap, what’s the difference?

An Oxford is a shoe that features a closed-lacing system on the shoe, resulting in a tighter shoe and more formal appearance. Brogues refer to the decorative perforations along the toe-cap, sides, or upper length of a shoe, which give a visually impressive appearance to a shoe, and can be found on Oxfords.

We hope this has inspired you to go out and look at many examples of Oxfords and brogues, and if you haven’t yet decided upon which should grace your wardrobe, we would recommend you consider one of each as they are useful in different situations.

Filed Under: Guides & Information
Tags: brogues, Guide, How to, Oxfords
Step In To Sustainable Shoes With Cheaney
The Best Shoes to Wear with Jeans