How to Wear Oxford Shoes 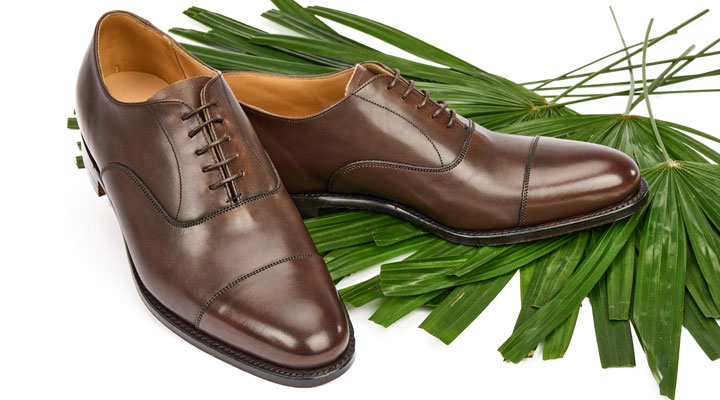 Oxford shoes have been an essential shoe for discerning gentlemen for centuries. So when it comes to the ultimate dress shoe, the Oxford beats out all competition. Able to complement a smart casual and formal outfit, the Oxford is versatile and timeless. In this guide, we will delve into what makes this shoe such a classic.

The History of the Oxford Shoe

The Oxford as a design is thought to have come from the Oxonian, a half-boot with side slits that gained popularity and prominence at Oxford University around the year 1800. However, students rebelled against knee-high and ankle-high boots, instead preferring the shoe we now know as the Oxford.

Across the Atlantic, an Oxford is often referred to as a Balmoral — which here in Britain we know as a different shoe altogether, which has no seams — or as a “Bal-type”. This is thought to refer to the fact that Oxford style shoes were seen around Balmoral Castle in Scotland.

Originally, Oxfords were a plain shoe but they have evolved over time to become versatile shoes that fill the formal space very well, with perforations on the upper creating a pattern called “brogue’.

What is an Oxford shoe?

As stated, an Oxford is a formal leather shoe characterised by shoelace eyelets that are hidden underneath the vamp — known as closed lacing. Directly opposing the open lacing of a derby.

Traditionally, an Oxford will be black or brown; other colours are not only possible but are stylish and popular in the contemporary Oxford shoe.

It is possible to come across quarter-brogue, semi-brogue, and full-brogue (or wingtip) Oxfords, each referring to the level of detail in the patterning around the Oxford shoe. A quarter-brogue will only feature two narrow bands of perforations along the end cap stitching, a semi-brogue will feature the pattern across the end cap and along the stitching of the upper, and the full-brogue or wingtip will feature the classic design the style is known for, the wingtip, an elongated end cap with full broguing.

Notice how in each example of the Oxford, no matter the amount of brogue patterning, you will always see the closed lacing system that is the defining feature of all Oxfords.

The wingtip design of the end cap, as you see above, comes along the inner and outer edges of the shoe to create a layered pattern across the leather of the shoe. The end cap also features a protuberance, as opposed to the straight end cap of a quarter- or semi-brogue.

Of course, there are also Oxfords that feature no brogue at all, these classic shoes are often polished to a high sheen.

Oxford shoes are classic, and as such those timeless black patent leather Oxfords are the perfect dress shoe, but due to the modern styling of Oxfords they also work well in smart-casual situations; particularly when paired with anything less than a suit.

Eye-catching examples of Oxfords that feature two-tone colours, such as these Edwin Two Tone Oxfords, are fantastic for semi-formal events where you can pair the colour of the shoes to your outfit.

Being a close-fitting pair of shoes, attributed to the closed lace design, the Oxford is not the perfect shoe for a long walk. For events where form is more important than function, you will do well to don a pair of these shoes.

For longevity, ensure that any Oxford you purchase is Goodyear welted, which is a method of construction that allows for the shoe to be resoled and offers longer life on the shoe in the first place. A Goodyear welt offers some protection against water, as the seal on the shoe is excellent with this method. As with most dress shoes, Oxfords do have a heel and can add height to the wearer.

As the Oxford is a sleek and somewhat understated shoe, when the traditional black or brown leather is used, these shoes are perfect for work situations where a traditionalist boss may not want flashy shoes in the workplace. If tradition is what you’re going for, then any wedding will be the perfect occasion for Oxfords.

A pair of Oxfords are a fantastic investment for any man, as they are the quintessential formal shoe and go exceedingly well with a tuxedo or suit. These shoes will undoubtedly be used time and again if you own a pair.

See our Men’s Oxford catalogue for a selection of handcrafted Oxford shoes, the truly timeless shoe that all men should own.

Filed Under: Guides & Information
Tags: How to, Mens Shoes, Oxfords
The Best Shoes to Wear with Jeans
﻿Ask Alex: What’s the point in leather soles?