A guide to Chukka boots 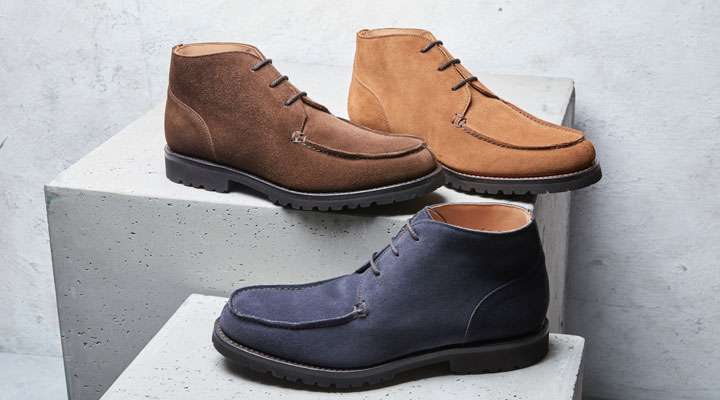 There’s no doubt that Steve McQueen was one of the coolest people that has ever existed. Many of us dream of possessing that kind of effortless sophistication, and in the classic 1968 film ‘Bullitt’, he can be seen doing all sorts of action-movie-star antics in a pair of trusty chukka boots. So whereas we may not have the car, the bike, or the fame… we can wear the boots.

How to spot them in the wild

Chukka boots are fairly universal in their styling. They are a low-cut boot finishing just above the ankle, usually featuring 2 or 3 eyelets, with open lacing. Chukka boots are available in a myriad of materials, though as they are a more casual style, they are generally seen in versatile colours, grain leathers, and suede.

Due to their low cut, chukka boots are a halfway-house between shoes and boots and have usefully carved out a place for themselves in terms of adaptability. Equally at home with jeans and laid-back tailoring, they are popular all year round and have been a consistent best-seller at Cheaney since we started.

Where did they come from?

Compared to most other mainstay shoe styles like oxfords or loafers, the chukka’s rise in popularity is quite recent – and like many good ideas that the British have had over the years, it was stolen from someone else.

During World War 2, the troops stationed in southern Africa were woefully overdressed for the desert heat in cumbersome leather combat boots and, having seen the styles worn by locals, commissioned pairs to be made and worn in their downtime. They were crafted from lightweight suede and featured crepe rubber soles, combining lightweight comfort and rugged practicality to combat the harsh climate.

Nathan Clark, from a famous shoe company of the same name, picked up on the chukka’s popularity and began manufacturing them for general sale in the UK in the late 1940s. Marketed as the boot that ‘beat the desert’, they imaginatively called them ‘desert boots’ (not to be confused with ‘dessert boots’) and the rest is history.

What’s in a name?

Chukka. It’s a strange word, one that makes less sense the more you look at it (a phenomenon called ‘semantic satiation’, if you must know).

There are two widely believed stories behind the name ‘chukka’. It is thought that the popular style was initially brought over to southern Africa from India, where ‘chukker’ refers to a leisurely walk. This would make sense as the robust soles, comfortable uppers and added ankle support would be a very good choice for such a jaunt.

However, a ‘chukka’ is also the name given to a seven minute period of play in a game of Polo, where this footwear style has been historically favoured, cementing itself into the casual sports shoe bracket.

I’d love to tell you which one is true, but it’s just as likely to be both. If we don’t know now, we never will.

How to wear them

Chukka boots are simple, practical, and have stood the test of time, therefore can work easily with a variety of outfits. Due to their heritage and popularity in sportswear, dressing these casually is as straightforward as it comes. A pair of jeans and a fitted t-shirt would benefit greatly from a good pair of chukkas, especially in suede.

Separate trousers and an unbuttoned shirt would also tie in perfectly with a classic pair of chukkas in leather or suede, which would be the perfect outfit for lunch with the in-laws or one of those fancy garden parties I’m never invited to.

Alternatively, you can go full Mod-style and style them with a slim fitted suit, pin-collar shirt and a healthy dose of attitude.

How should they fit?

The same rules apply here as with any other style of welted shoe. Firstly, make sure you have some breathing room in order for the leather to work around the foot, and avoid any pressure in the toebox or heel. This is even more important with boots as it’s beneficial to have room for thicker socks for winter.

With chukka boots, the leather is uninterrupted from the toe all the way to the top of the tongue, which sets it apart from most other styles. In some cases, you will see a crease appear underneath the lacing, where the leather is working around the instep and the front of the ankle. Trying a half size up should fix this problem, or at least make it less noticeable. Ultimately, the leather will do what it needs to do in order to be comfortable.

Are chukka boots for me?

Well, you’ll never know unless you try them. They’ve been favoured by film stars, rock stars and secret service agents, so why not join the club and treat yourself to what has become a true modern classic?

Filed Under: Ask Alex, Guides & Information
These Boots Are Made For Walking
Tied up in knots – a guide to tying your laces