Origins of a Spectator Shoe 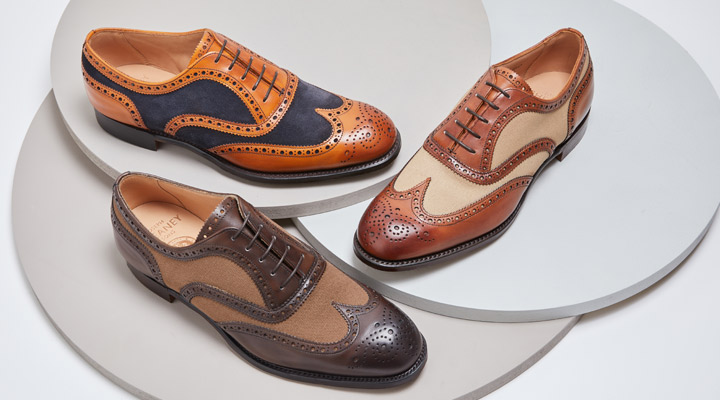 A walk through time

Spectators, otherwise known as ‘correspondents’, ‘two-tones’ or ‘really nice shoes’, are an eye-catching and vibrant style favoured by vintage lovers and contemporary fashionistas alike. Typically made using two or more contrasting colours, they rarely go unnoticed, and the history of these shoes is about as colourful as their uppers.

As is the case with a lot of cultural developments that are over 100 years old, the exact origins of the spectator shoe are hard to pin down. The most popular theory attributes the initial design to a highly-regarded English shoemaker in the 1860s as a sporting shoe, around 20 years before Joseph Cheaney opened his factory.

Recognisable due to their contrasting colours, they were initially favoured by cricketers and golfers, presumably to add some interest to the game. The lighter of the two contrasting leathers would often include some sort of lattice work or brogueing for breathability and comfort. The crowds of spectators at these events liked the look of these shoes so much that they decided to get some of their own, hence the shoes being referred to as ‘Spectators’ – this sounded much better than ‘golfers’ or ‘cricketers’.

Spectator shoes soon found their way into the most suitably flamboyant circle of society: the arts. With the golden age of cinema, people were able to see for the first time what the stars were wearing and the two-tone shoes became ever more popular with jazz musicians, artists and dandies.

However, around the 1920’s, whilst everyone was having a good time in their fancy shoes, the upper echelons of society decided that they were having far too much fun and deemed that Spectators were uncouth and uncivilised. This fall from grace worked both ways, as Spectators were favoured by the somewhat unfavourable King Edward VIII, who stepped on the country’s metaphorical toes by abdicating the throne.

As if it couldn’t get any worse for Spectator shoes, they were given the new name of ‘Co-respondents’, a play on words between the corresponding leathers and the name of the third party in a legal case of adultery.

Thankfully, we moved on: women got the vote, the internet was invented, and Spectator shoes returned to favour in modern culture. They are now highly regarded as a special occasion or party shoe, and add a touch of vintage flair to your outfits.

How to recognise them in the wild

Spectators usually follow the pattern of a full brogue, otherwise known as a wingtip. With so many different pieces of leather that go into them, the scope for creativity is limited only by the imagination of the shoemaker, though the combination of two colours is most common – the area around the toe, heel and eyelets tend to match whilst the vamp and facings are in a contrasting colour. Semi brogue and quarter brogue patterns can also be used for a spectator style.

In terms of materials, different colours of leather can create some vibrant options, with black and white being a traditional selection. Again, there are no rules here, and tonal variations of the same colour or the combination of smooth and grain leathers are quite popular.

Another reason why shoemakers like making Spectators so much is that they can experiment with materials other than leather. Suede is a natural choice, especially for the vamp area where the shoe creases as this provides extra comfort. However, materials like canvas and tweed have been used in the past to create some striking designs.

How to wear them

The short answer is: however you like. I’m aware that’s not very helpful, but Spectators draw attention for all the right reasons, so if this is your first foray into wearing them, I’d keep the rest of the outfit pretty simple. Suits with a button-down shirt, chinos and an odd colour jacket, jeans and a block colour t-shirt… those kinds of things. Vintage touches like wide-legged trousers work really well.

I would usually warn people against trying to perfectly match colours in their outfits as it’s very hard to do and can make it seem contrived. Instead, look at complementary colours and use those as a way to make the shoes work: if one of the colours on your shoes is blue, look to wear them with lighter creams or a pop of peach to make them both sing. Similarly, if there is a lighter tan in the shoes, pairing those with navy will create a nice contrast.

It’s very rare for someone to try on a good pair of Spectators and not smile. They’re fun, individual, and represent a refreshing rebellion against the bland monotony of the rat race. Ultimately, they can make a person feel good about themselves, and we could all do with some of that.