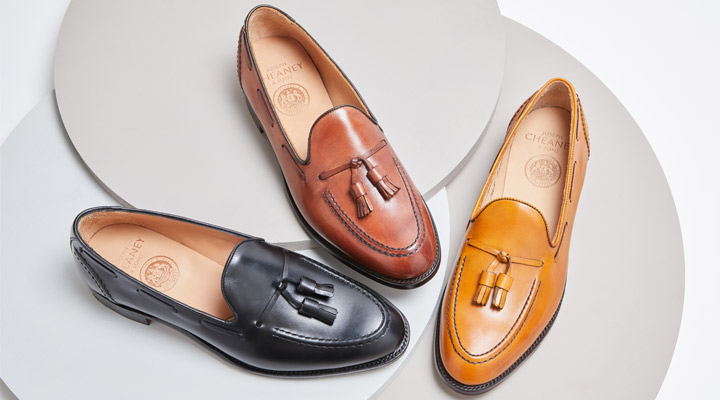 The loafer’s origin story is one of necessity, cultural identity, and fish.

I should have known better than to try and tell the definitive history for this hugely popular style. The older and more popular something gets, the more muddy the origins; not only through disputed stories, but the simple fact that everyone tries to argue that they got there first.

To research the history of loafers, you have to go back to a time when shoes were in their infancy – they’re that old. Native Americans would fashion themselves stitched leather footwear to protect their feet against all sorts of dangers on the ground, which they named ‘Makasins’ – not coincidentally, this is where the term ‘mocassin’ comes from today. The oldest pair of Makasins in existence have been dated from the year 3500 BC, so we can only assume that the owner has been using shoe trees and keeps on top of polishing.

Fast-forward a few thousand years (nothing much happened anyway) to Europe, where Norwegian fishermen were wearing moccasin-style slip-ons for practicality, similar to the ones found in the country now known as the USA all those years ago. This is where the story gets a little fishy – one story states that travellers to Norway were fond of the fishermen’s footwear and took them back to the States. Another belief is that a gent called Nils Gregoriusoon Tveranger, a local who had studied shoemaking in Boston, decided to make the style for the market after noting their popularity with visitors.

Whichever story you prefer (both are just as likely to be true), we can find commercially-available loafers springing up in 1930’s America with a style called ‘Weejuns’, a derivative from the word ‘Norwegians’. This is also where we first start to see the distinctive strap that sets the style apart as a ‘penny loafer’, as the slot in the middle was the perfect size to hold a coin. As for its particular usage, stories vary from holding a penny for the shoe-shiner to payment for a payphone in case of emergencies.

Meanwhile, the British (who were not content with having already invented the lightbulb, powered flight, and America) decided that they first came up with loafers in the 1920’s as a form of casual shoe for King George VI to ‘loaf around’ in. However, similar styles had been around since the Regency era: Opera Pumps, or ‘court shoes’, had been in rotation amongst the higher classes since the 1700s and represented the pinnacle of formalwear. For the English, it was a case of dressing down the court shoes and slippers of the era into something more versatile.

Back in the USA, the humble loafer’s popularity was growing exponentially. The 1950’s brought with it a surge of high profile Americans showing off their new loafers, from stars of the stage and screen including Katherine Hepburn, Cary Grant and Fred Astaire, to the then-president John F. Kennedy. The style was integral to the ever-popular Ivy League style, personifying a cultural identity that would remain relevant to this day.

At this point, loafers had made their presence known all over the world. The Brits had finally relaxed enough to wear loafers with smarter outfits, and the Italians had put their own spin on things by creating elegant designs with less structure to suit their warmer climate. Loafers are the shoe equivalent of the Everyman, suiting needs across the globe in a stylish way.

Whereas the penny loafer style is the most widely-available choice, loafers today come in all sorts of different designs. Tassel loafers have their origins in boat shoes, where the tassels themselves were attached to the braided leather strip running along the top of the shoe, giving the wearer the ability to tighten the fit.

It’s hard to find a similar style of shoe that has so many applications across different styles, formalities, cultures and climates. To go into every iteration of what is essentially ‘a shoe without laces’ would involve writing a book, and I’m not sure anyone would read it. Rest assured, there’s probably a loafer to suit your needs – smart black leather, sumptuous unlined suede, or rugged rubber soles.

Filed Under: Ask Alex, Guides & Information
Origins of a Spectator Shoe
These Boots Are Made For Walking