Rambling Man – How On Earth Did I Get Here? 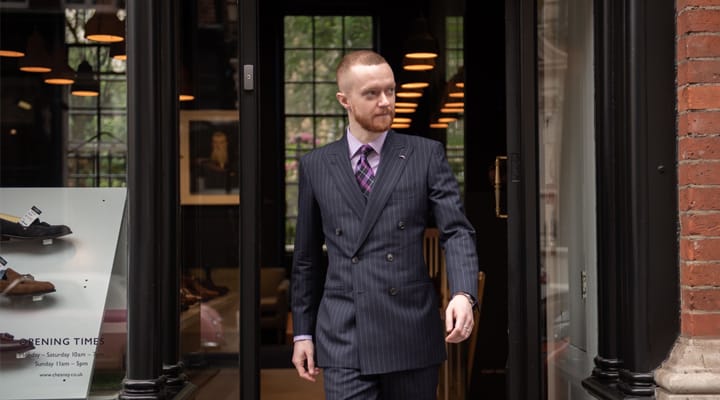 As soon as you arbitrarily complete 18 calendar years of life, you’re suddenly considered an adult. You can drink – yay! You can vote – cool! You can consent to your body being used for medical studies after you die – alright then! However, it would seem that everyone also expects you to know exactly what you want to do with your life.

When I was 18, my school instructed us to make a list of everything we wanted to achieve by the time we turned 28. According to this list, I should be making a living as a musician good enough to afford a detached house for myself, my significant other and my dog, with enough left over for a jet ski. Oh, and I also own a massage parlour. To this day, I still have no idea why.

Welcome to today’s theme: the vast majority of people have no idea what they’re doing, especially when they’re 18. So, in my 29th year, sat in my flat in London desperately lacking a jet ski, I thought I’d give an abridged version of how I got into the footwear business.

My working life started in the same sector as a lot of other people: hospitality. My first job was in the kitchen of a fine dining restaurant as a kitchen porter, otherwise known as a ‘dish washer’ to some, though I preferred the title that my co-workers created: ‘underwater ceramic technician’.

After achieving a degree in English (which is about as useful as you’d expect), I moved to the bright lights of London to study and pursue a career in acting. This is a noble profession, but not one that is lucrative in the slightest. How on earth would I be able to afford a jet ski at this rate?

I continued working zero hour contracts in bars, cafes and theatres to pay my rent. Although these jobs were purely a means to an end, I still wanted to do them well. I perfected my coffee skills by pouring heart shapes in every latte I made – even when I tried to do a different shape, it came out as a heart. My proudest moment behind a bar was being trusted by the Irish regulars to pour their pints of Guinness – anyone who has worked in a bar (or is Irish) will appreciate how unfathomably proud this made me.

I think everybody should work at least a month in hospitality as a national service. Everyone would be a lot nicer to each other if they did.

I wanted to be an actor because I thought it was all I could do, until I tried to make a career of it and realised it wasn’t. It was a slow yet definite realisation that I simply didn’t possess the mindset to sacrifice so much for something that didn’t give me much in return. This wasn’t the life I set out for myself aged 18 – I didn’t even have a dog! Come to think of it, I still don’t.

I’m sure by now you’re wondering why you’ve got this far in the blog and haven’t heard anything about shoes. Well, at this point, I hadn’t even considered it as a career. I was a 20-something guy who had no idea what on earth he was doing.

My brother came to visit me in London so we could buy suits for a wedding, and this was where the wonderful world of shoes opened up for me. I’d always enjoyed window shopping around the more affluent areas of central London looking at things I couldn’t afford, and I always seemed to spend a bit longer looking at shoe shop windows. On this particular day, we walked past one such shop and both my brother and I were enthralled. We’d just bought suits, so we couldn’t afford to also spend a considerable chunk on shoes, but we spent a little while in that shop.

Over the next few weeks after visiting, those shoes were all I could think about. As much as I tried to talk myself out of it, I realised that the only option was to buy a pair. So I did.

I spent every single penny that I had on that pair of shoes. That is no exaggeration – I quite literally had no money left. But, my god, I regretted nothing. I used to sit in my room and stare at them; I hadn’t met my wife at this point, so they were the most beautiful things I had ever seen – and they were mine. I know now that they were about a size and a half too big for me, but at that point I didn’t care.

I was sold, not only on the shoes, but on what I wanted to do: I was going to work in a shoe shop! I tried to get a job in the store that I had bought my prized pair in, but they were having none if it, so I figured I couldn’t be too picky with where I applied. I had no retail experience, let alone in the higher end.

I printed off a stack of CVs, put my special shoes on, and walked down the entire length of Jermyn Street handing a CV into every shoe shop I came across – most places told me they weren’t looking, and one particularly high-end English manufacturer looked me up and down and said ‘absolutely not’ when I enquired, which has probably shaped my approach to selling more than I realise.

The last store I got to was a brand you may have heard of called Joseph Cheaney & Sons. Out of all the shops I visited that afternoon, this was the only one where the staff actually had a conversation with me – it was clear that this was a place where people knew their stuff, but most importantly weren’t snobbish in any way. Perhaps the biggest revelation after visiting the shop that day was that the shoes that had nearly bankrupted me a few months previous, my pride and joy, were actually made in the Cheaney factory and stamped with a different name.

I was happy to be invited to an interview with Marc Debieux (who was to be my manager, a great bloke who I have previously written about on this blog) and Martin Grey, our inimitable head of retail and a bit of a legend amongst the English shoe brands.

When Marc called to offer me the position 4 years ago, I accepted before he’d even finished his sentence.

So here we are. My life hasn’t turned out at all like I predicted when I was 18, but I’d hazard a guess that no one’s has. So whereas I may not have a dog or a jet ski, I did manage to find a career I enjoy pretty much by chance. I suppose what I’m trying to say is, don’t worry if you don’t know what to do. Most people don’t.

You can find Alex over on Instagram at @shoes_maketh_man