It’s All In The Chase 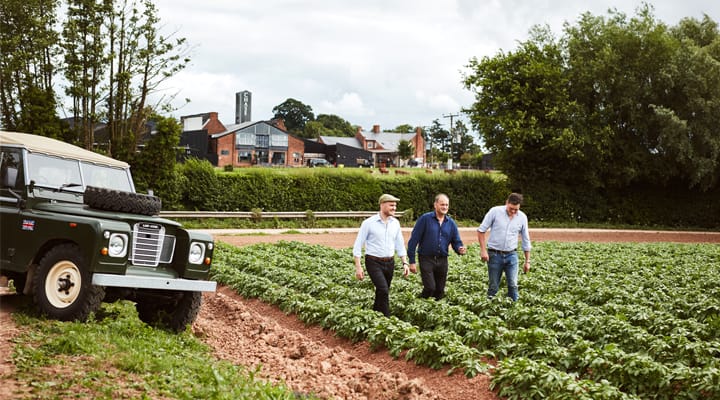 ‘I always think that as soon as a brand stops telling their story – the reason why they started – they become a brand without substance.’

James Chase, head ambassador of Chase Distillery and Cheaney fan, certainly has a story to tell. In just over a decade, his family’s distillery in Herefordshire has elevated itself to one of the most successful spirits manufacturers in an increasingly large market. Their secret? Authenticity and family.

Their story starts with James’s father William, a ‘mad eccentric’ and fourth generation potato farmer from Herefordshire, a county famous for cider production and potatoes. So rooted in family tradition, James even says he is beginning to look like a potato: ‘cut me open and I bleed Maris Piper’, he tells me.

His father was not blessed with a huge farm, and realized they must diversify in order to survive in a struggling mid 90s market, so he decided to build a deep fat fryer in the workshop and founded Tyrrells crisps. However, it was whilst in the United States researching fryers that James and his father saw the resurgence of craft manufacturing: ‘most of the gins in the UK at the time were made in big, monolithic distilleries’, James recalls, ‘we thought, as farmers, could we give customers a real story in terms of field to bottle?’

So they did. The distillery was built in 2008, producing vodka, and the gin came two years later.

Chase are champions of their ‘field to bottle’ ethos. Their spirits are very unique insofar that everything is distilled from scratch, from raw ingredient to bottling; something which most other gin manufacturers do not do. James likens it to ‘a great pair of shoes or a good bottle of wine; it should come from one place.’ He has noticed that people are buying into this more than ever, and is really what sets Chase apart from the rest:

‘Most gin houses buy in what is called a ‘neutral grain spirit’, which is not a bad thing, but it’d basically be like Cheaney buying in a pair of shoes then putting the laces on. We believe in total end-to-end production.’

To make the vodka and gin that Chase produce is a difficult process involving 2 weeks of work and roughly 250 potatoes per bottle. James’s brother Harry harvests the spuds before they are placed in cold stores ready for peeling. ‘I always joke with bartenders that it’s my granny that peels them,’ James laughs, ‘then we mash them, add brewer’s yeast, and ferment them before putting them in the still. That’s the most amazing thing about it: it’s just a raw ingredient and water.’ That vodka can then be re-distilled with juniper berries and other botanicals to create gin, which now accounts for around 75% of their output.

It is clear that James is a true believer in the quality of the product, so in the interests of trying to be stylish in all things (rarely successfully), I ask him how he recommends drinking their gin:

‘We encourage people to try the spirit neat. The biggest problem with gin at the moment is that tonic brands are targeting the flavour of tonic instead of the gin, but there is a lot of sugar in tonic water – some contain more than a can of coke. If you add sugar to anything, it tastes good. I could easily have five gin and tonics, but could I have five cans of full fat coke? No. I think the next trend should be reducing the sugar, with a gin and soda for instance, because you can actually taste the quality of the gin.’

I think this sounds like a marvellous idea, so we order some. Of course, the establishment we are in stocks Chase.

‘If I’m celebrating, entertaining, or impressing,’ James says, ‘Duke’s Bar in Mayfair is incredible. Alessandro, the bartender, brings a bottle straight from the freezer, pours a small amount of vermouth into a martini glass and sloshes it on the floor. Then he pours in the gin or vodka and garnishes with a lemon twist. That, to me, is the best.’

‘But, you’ve got to go when somebody else is paying for it.’

James admits that he can’t put his finger on exactly what has accounted for Chase’s success. Their story and heritage clearly plays a part, assisted by their strategy on social media to tell ‘the story of the earth’, as he eloquently puts it, and their wildly successful distillery tours. However, word of mouth is arguably their best form of marketing:

‘Everybody is thinking more long-term. I’m seeing a huge trend of drinking less but drinking better. People may be making more expensive purchases, but they’re consuming less and buying into companies like ourselves with providence and history. It’s the same with Cheaney – fewer people are going to be buying high street shoes and instead invest in something of quality.’

‘We have to start looking after ourselves. You either pay for it now, or you pay for it later.’

Much like myself, James loves a company with a story to tell. That, to him, is of utmost importance, and what led him to Cheaney. After visiting several different shoe shops in London, he loved the Cheaney heritage and – above all – enthusiasm shown by its staff in regards to the family-run business much like his own, making entirely English made products with honesty and craft. What is it about these companies and the stories behind them that James appreciates so much? ‘People’, he tells me, ‘it’s all about people and that connection.’

‘Our name is on the bottle. When you’ve got your name on something, it means a lot more. If you don’t like it, you know exactly who to speak to!’

To celebrate the launch of our new AW19 collection, which was shot on location at Chase distillery, we are running our biggest competition to date! We’re offering one person the chance to win a pair of Cheaney shoes, a bottle of Chase Gin and a bottle of Chase Vodka and a tour of both factories. For your chance to win and to see all the terms and conditions, please visit our competition page here.

With many thanks to Chase Distillery @chase_distillery