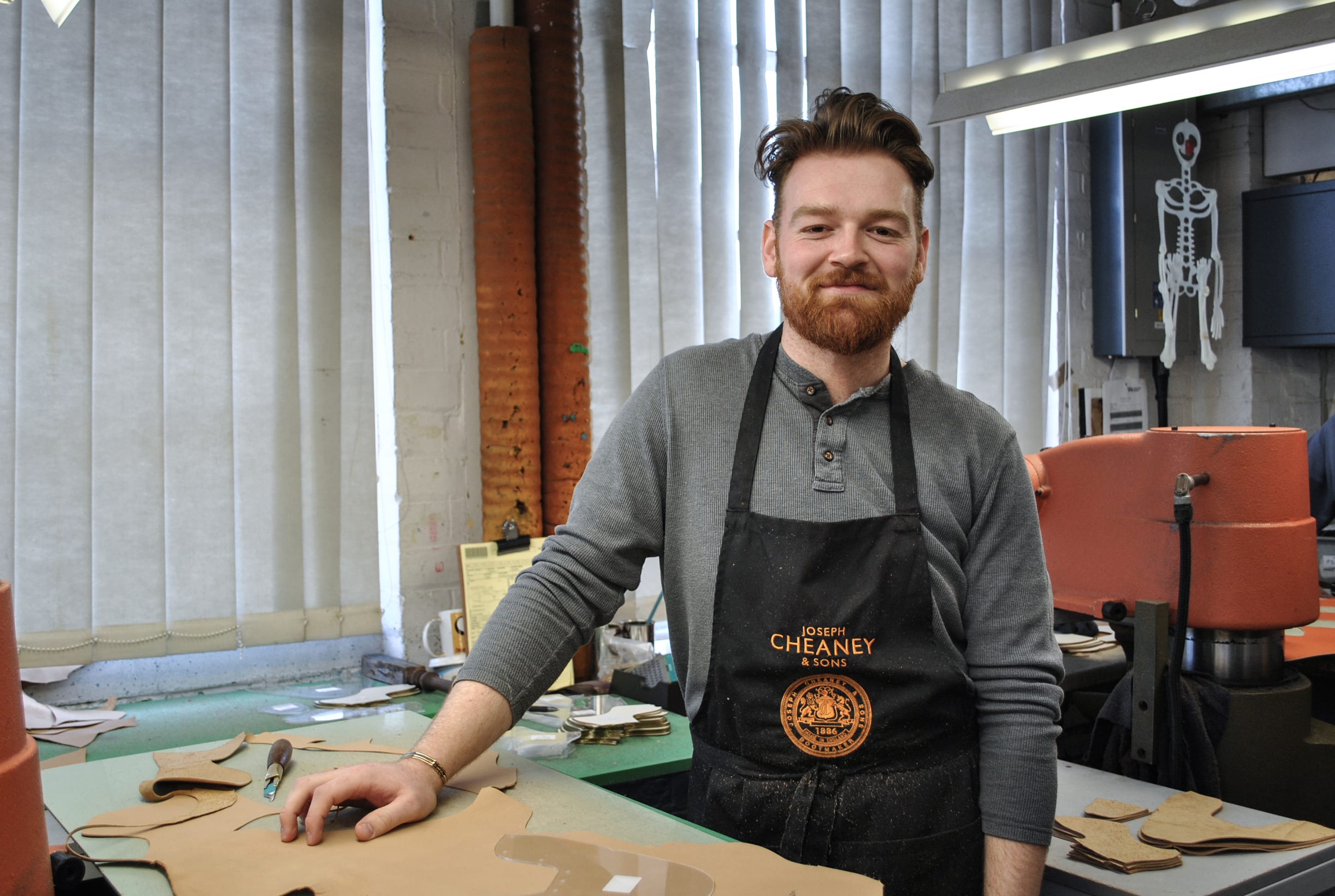 For today’s Factory Friday, I head back to the clicking room where tickets from the design department arrive at a speedy pace before before distributed amongst the various clickers. Clickers must manage the waste by cutting as many component pieces as possible from the same skin and the leather is meticulously checked for growth, wire marks, blemishes and colour inconsistencies, ensuring only the highest quality is selected. A clickers job involves meticulous attention to detail, accuracy and a good deal of patience and today I headed up to the room chat to one of the clickers, Terry who has been a part of the Cheaney team for 2 years.

So what does a typical day involve for you Terry?

There isn’t really a typical day as such but at the minute, the majority of my time is spent cutting raw materials for linings and assessing leather.

What did you do before you came to Cheaney?

I’ve had a handful of jobs since leaving school, I floated about for a while and my last job was as an Asbestos Removal Engineer. The job on paper sounded promising but after 6 months, nothing really transpired as it was pitched to me, it was awful really as I’m sure you can imagine! So I began looking elsewhere and started at Cheaney shortly after that. 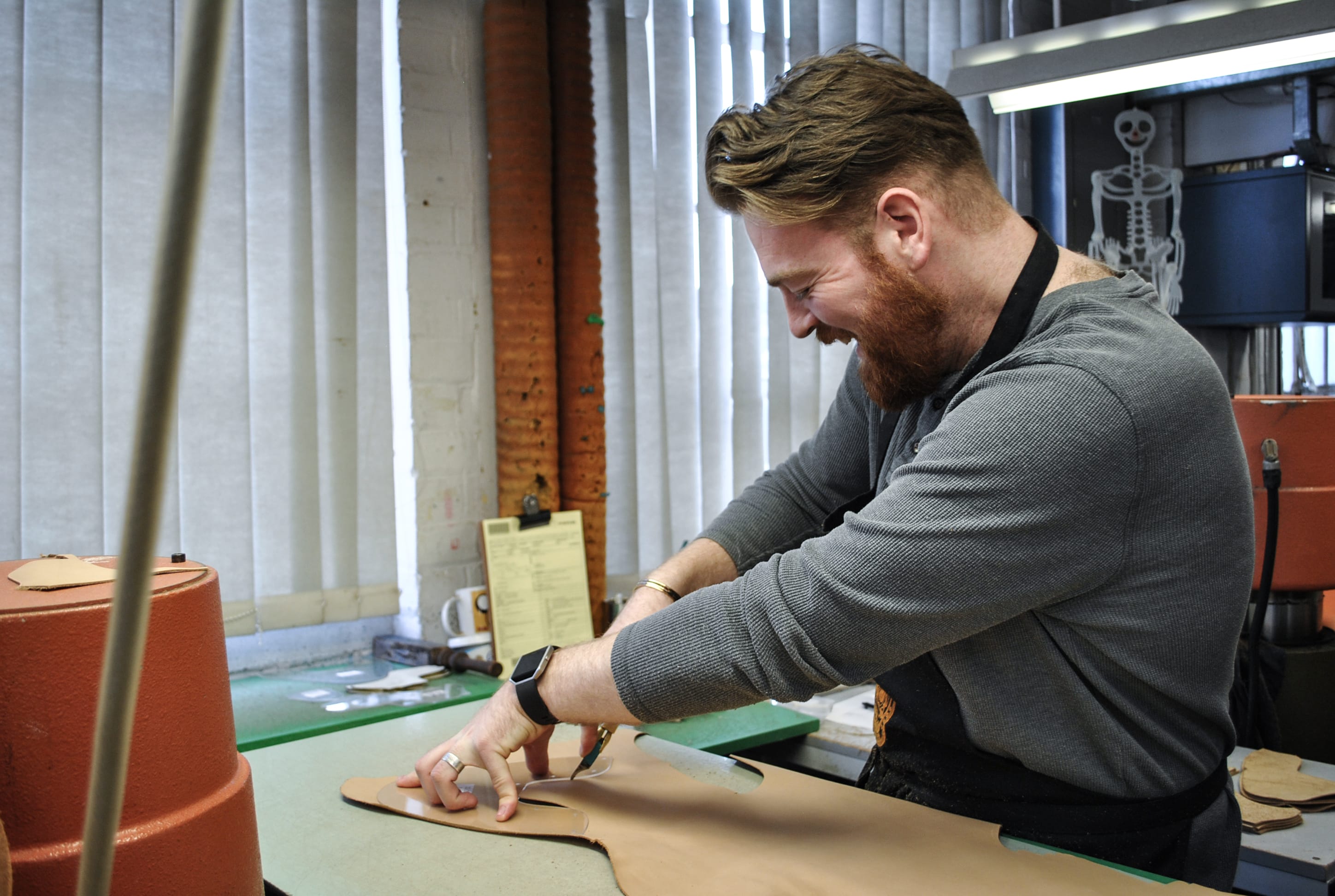 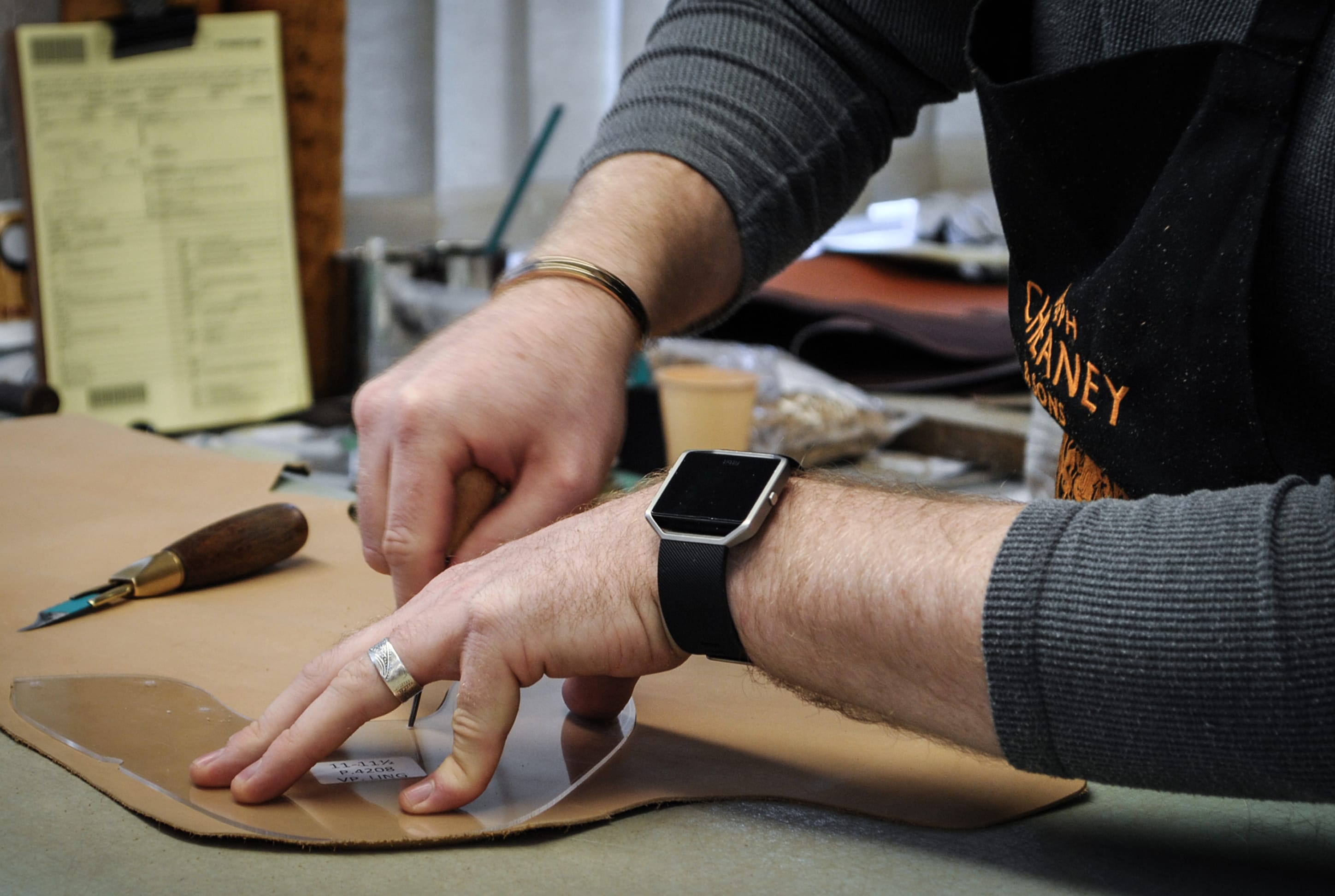 If you weren’t in the footwear industry, what industry would you say you’d be in?

That’s a really difficult one. My wife is an award-winning hairdresser and she started to show me the ropes as I wanted to be a barber.

I love shoes and footwear in general! I don’t wear an awful lot of trainers so I’m always looking for comfortable but smart shoes that have to be functional. I had a friend who worked here and I asked him if there were any positions available with Cheaney and he said there was. I was initially hired in the clicking room working on backers but was quickly moved on to cutting linings. The career progression at Cheaney really appealed to me and I was trained by Simon, who is now the Clicking Room Supervisor. There are so many people here with such a wealth of experience and are quite happy to show you and teach you and that’s something that is a great part of working here.

What did you want to do at school?

I wanted to be a tailor. I don’t have to be going to a fancy event or dinner to wear a suit, I often wear waistcoats and flat caps and just generally dress up! Becoming a tailor really appealed to me but unfortunately there was no advice available at school on how to go about getting the right training or even how to get in to that industry.

In your opinion, what is it about Cheaney that’s made it prosper over such a long period of time?

I genuinely believe that it’s because of the quality of the product and the men and women who craft them. When we have visitors from overseas and they have a factory tour, they love seeing the amount of operations that are still undertaken by hand. Honestly, I marvel at the craftsmanship and experience that some of the people I work alongside have, some of which have been here for 40 years plus. Roy works at the top of the Clicking Room and he works at such a speed but with such precision and accuracy, it’s just astounding. And people like that are willing to show, to take the time to teach you and you just continually learn. I really do feel that as a brand, we are up there with the best. 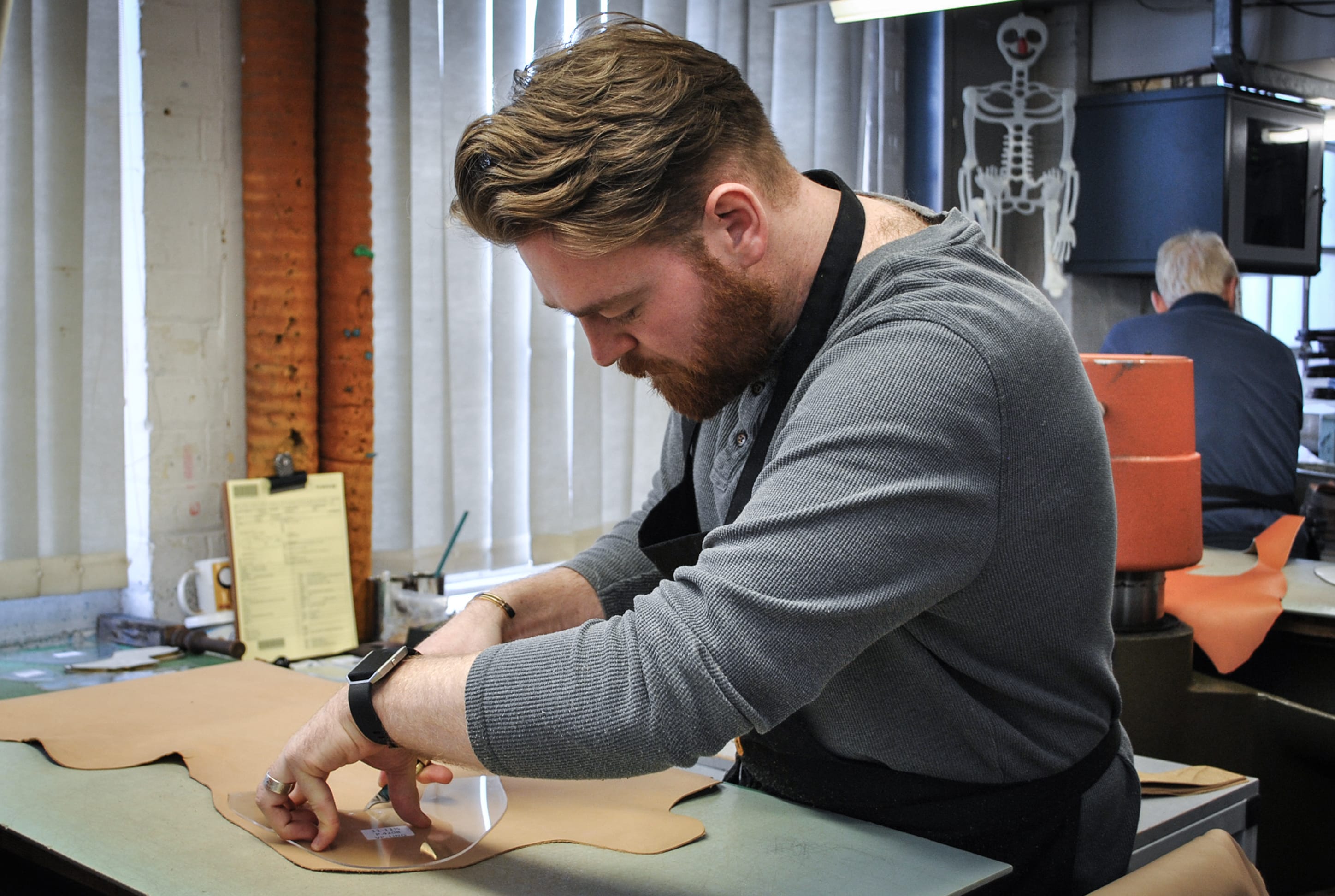 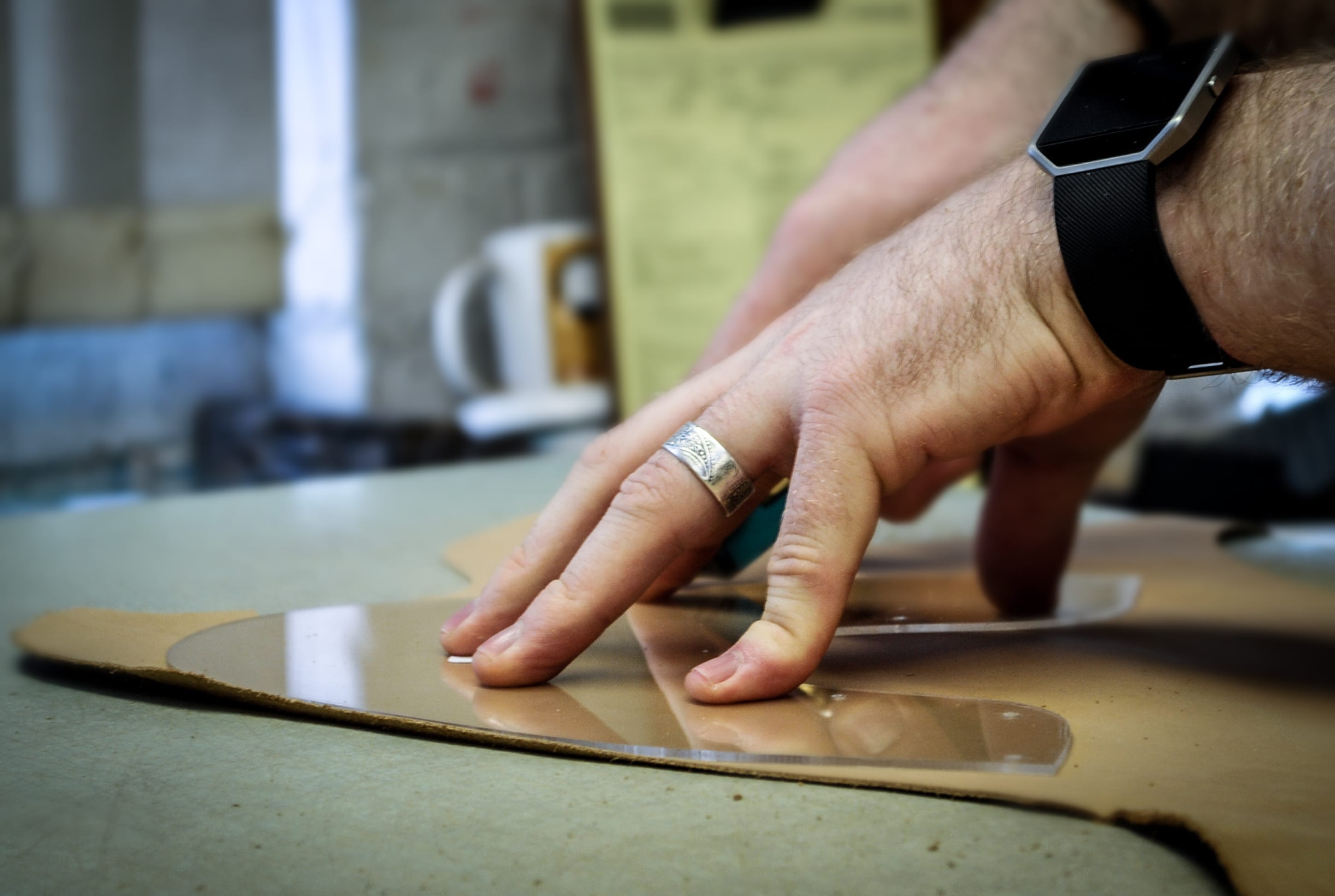 As a specialist skill, what’s the most difficult part of Clicking?

It doesn’t happen very often but occasionally you might get 200 pairs of the same shoe to cut so you know that for the next 2 days, you’re going to be cutting the same pattern for the same shoe using the same material. Thankfully it happens rarely and the day to day clicking is more varied otherwise it would get slightly monotonous.

How many pairs of Cheaney’s do you own?

And what’s your favourite style of footwear?

Definitely boots, I love them! I’m wearing my lovely Tweed wingcap brogue boots today, I wear them way too much, I’ve had them about 2 years.

At this point, I comment that they don’t look too worn to which Terry shows me the sole which has a hole in it.

Honestly, I’ve hammered them, I wear them every day which I know you’re not supposed to, I don’t rotate them and I don’t use shoe trees which I know I should! They really should be refurbished at this point and then they’ll be back to looking new but that would mean I’d have to stop wearing them and that’s not going to happen any time soon! 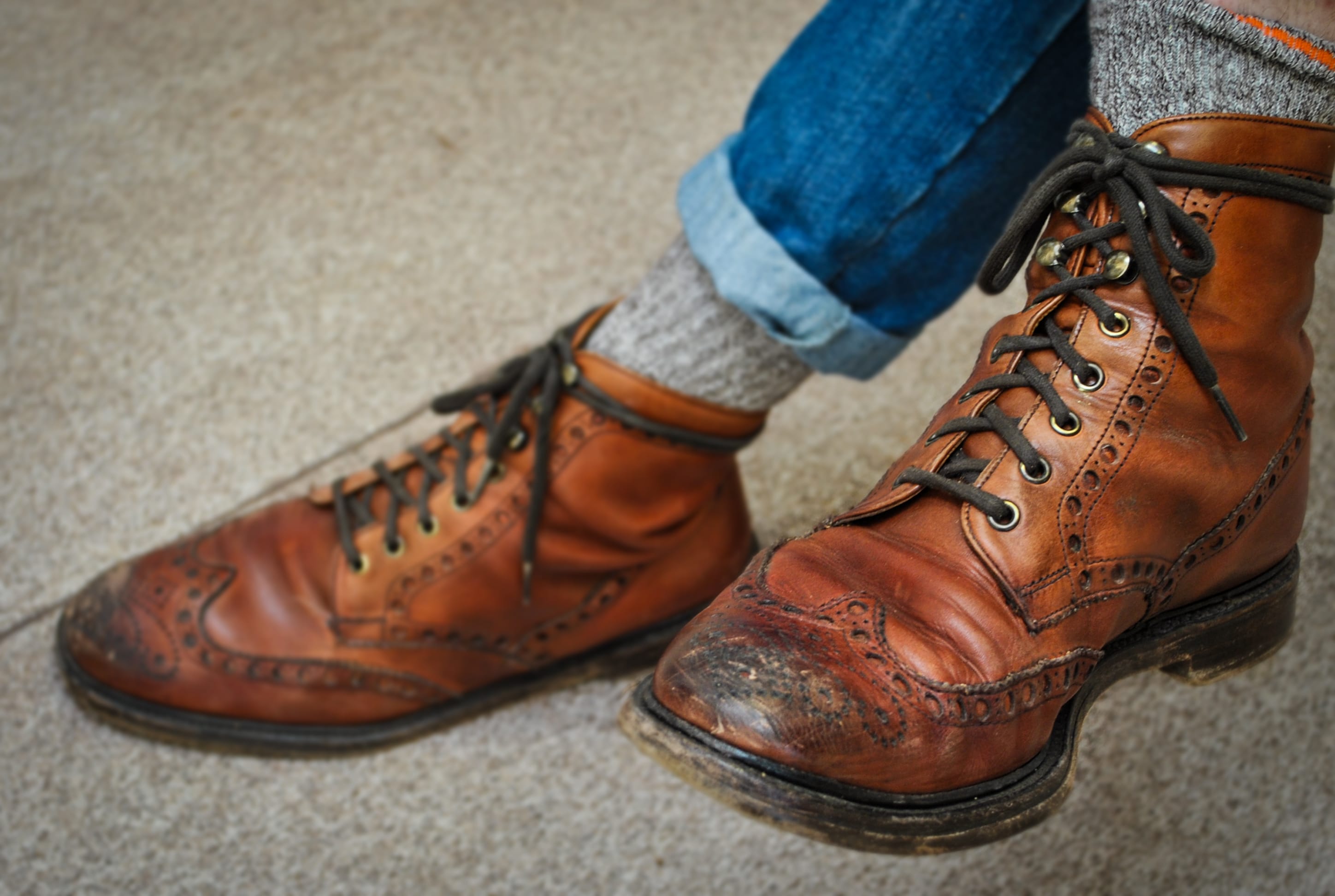 Filed Under: The Factory
Generations of Cheaney
Happy Easter From All At Cheaney Shoes!