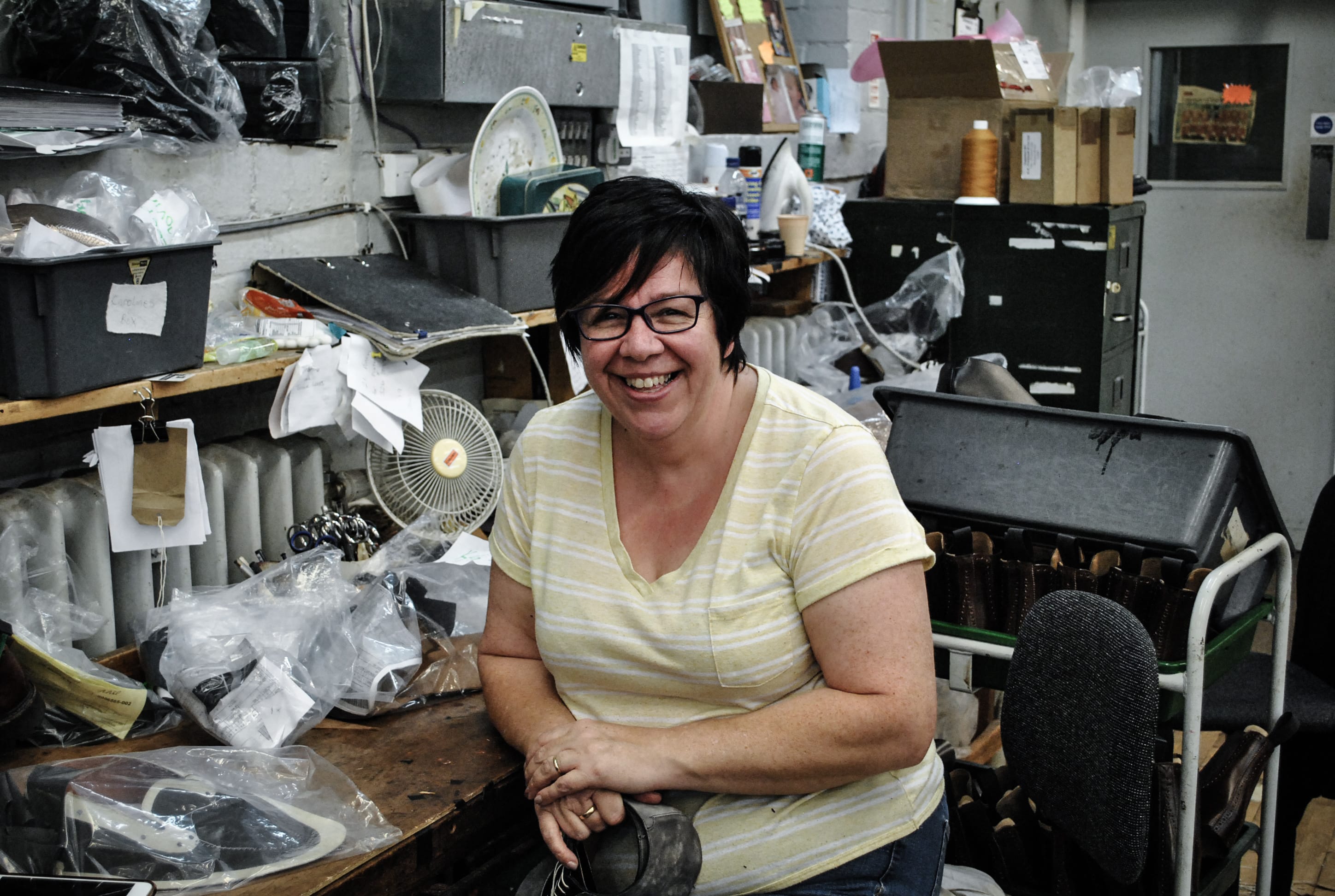 Walking in to the Closing Room today I met with Caroline, our Assistant Supervisor and right hand woman to Deanna, our Closing Room Supervisor. Pulling out my notebook, Caroline laughs asking if I have enough pages as she can ‘talk for England’ and it’s a claim that’s substantiated over the next half hour as we avidly sit and chat. Incredibly upbeat, Caroline is one of those people that you can easily talk to, with an open nature and a cheery disposition, she tells me about her 20 plus years with Cheaney.

What does the day start like for you Caroline?

I start working on repairs, reheeling customer’s refurbishments at about half six in the morning. Then the rest of the day is usually spent supporting Deanna, helping out on stations where people have phoned in sick or they need help finishing tasks, just being involved and hands-on really, I’ll go where I’m needed.

So could you essentially jump on to any station and start working on that stations’ task?

I wouldn’t say I can do everything! But most of the jobs in the Closing room I can do, like fitting, stitching, sewing, all of those sorts of things. 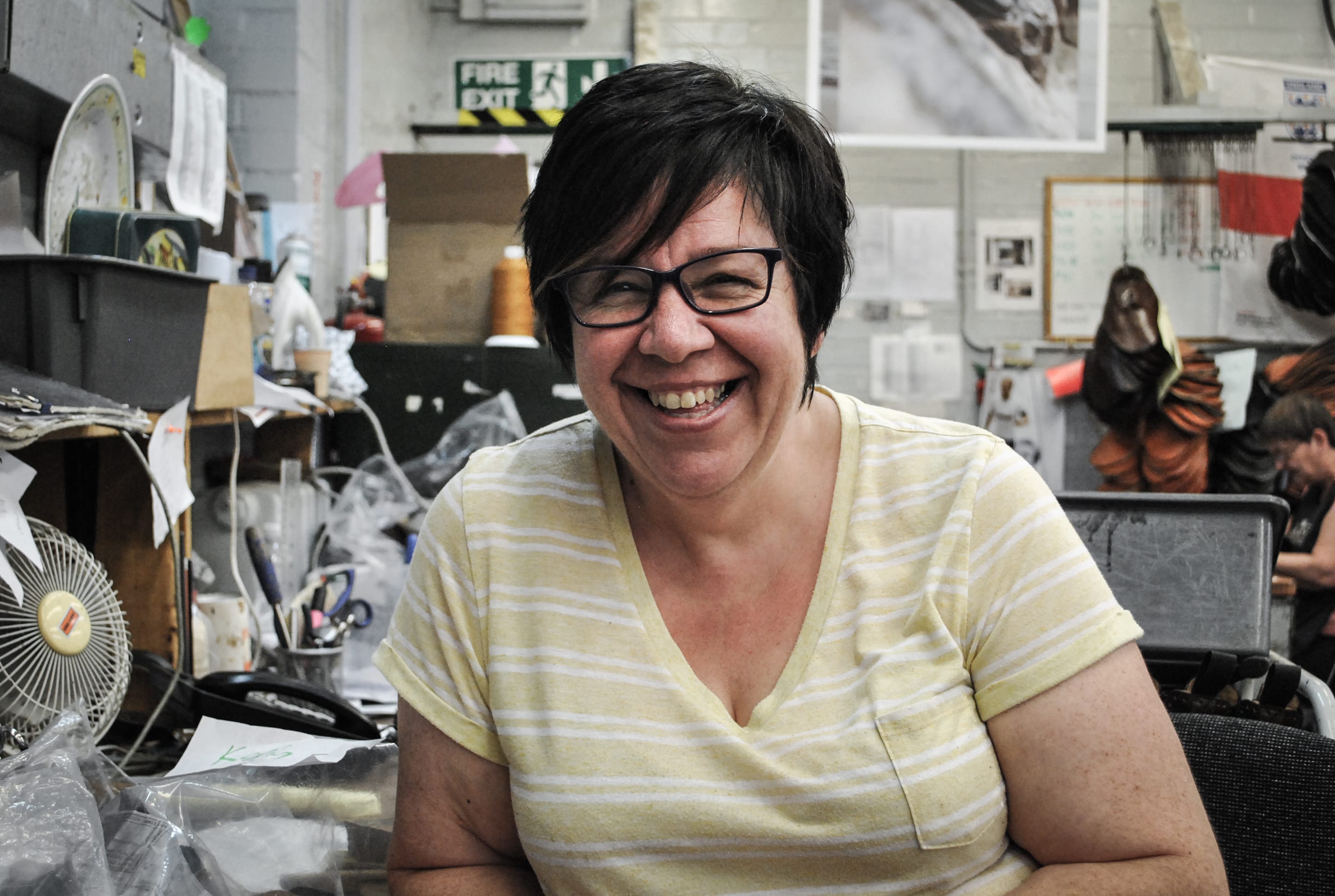 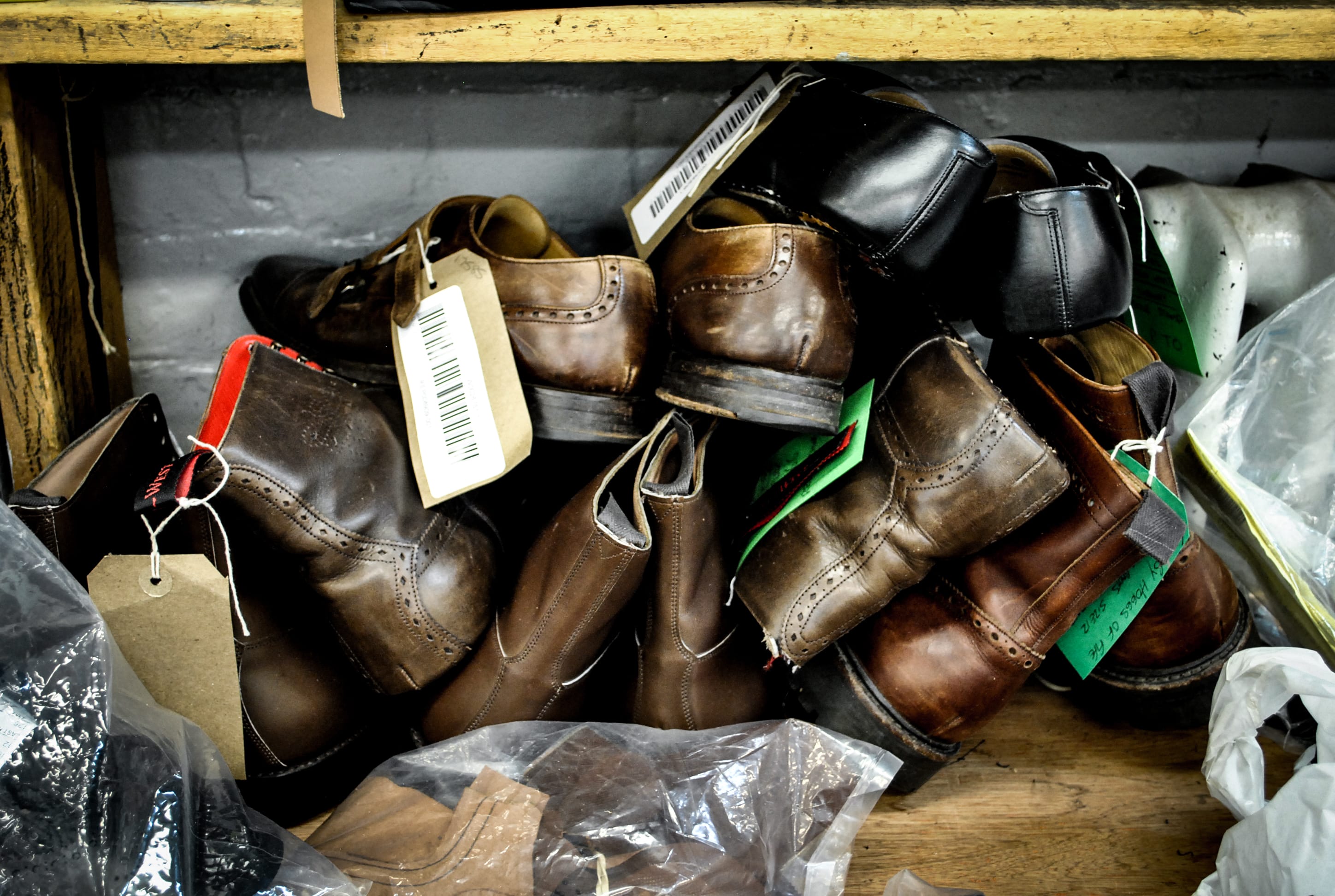 It takes a lot of skill to be able to do the processes you just mentioned but I suppose that would come with the vast amount of experience you’ve had here. How long is it you’ve been with Cheaney? Did you come here straight from school?

Almost. I applied for a job here first but there was nothing available at the time. In the 80s, Desborough had quite a number of factories so there was always work going somewhere but I really wanted to be at Cheaney. When they said they didn’t have anything available, I applied to and was given a job at a local moccasin factory but after two weeks Cheaney called as a position had come up so I left that factory and moved over here!

Why was it you felt a pull towards Cheaney in particular?

I don’t know really, I suppose my Dad worked here for over 50 years in the Making room and I really wanted to work for the same company. When I started I avoided going in to that room because that’s where my Dad worked with all the other men but sometimes I had to take shoes throughout the factory so I would pop in and see him, but I would literally shoot in and back out again!

The Closing Room has an entirely female workforce, what’s it like working in that environment?

I think that maybe people would think that there is a lot of clashes and it would sometimes be a bit chaotic but that’s not the case at all. The most important thing about working in this room is that you have a positive attitude and that you work as a team. We all have our individual tasks to do but each tasks contributes to the finishing of the final product so we all help each other out. Of course, you can’t be happy all the time and some of the girls will air their grievances but once they talk to you, it’s like they’ve gotten it off their chest and it’s back to business as usual. It’s funny because the Making room, where my Dad worked, has an entirely male work force but they are worse than us for being nosy! We wind them up and they do the same with us, it’s quite funny really, it’s good to have a bit of banter. I couldn’t just sit at my machine and continuously work, head down, I have to interact with people and laugh and smile and I get to do that here. 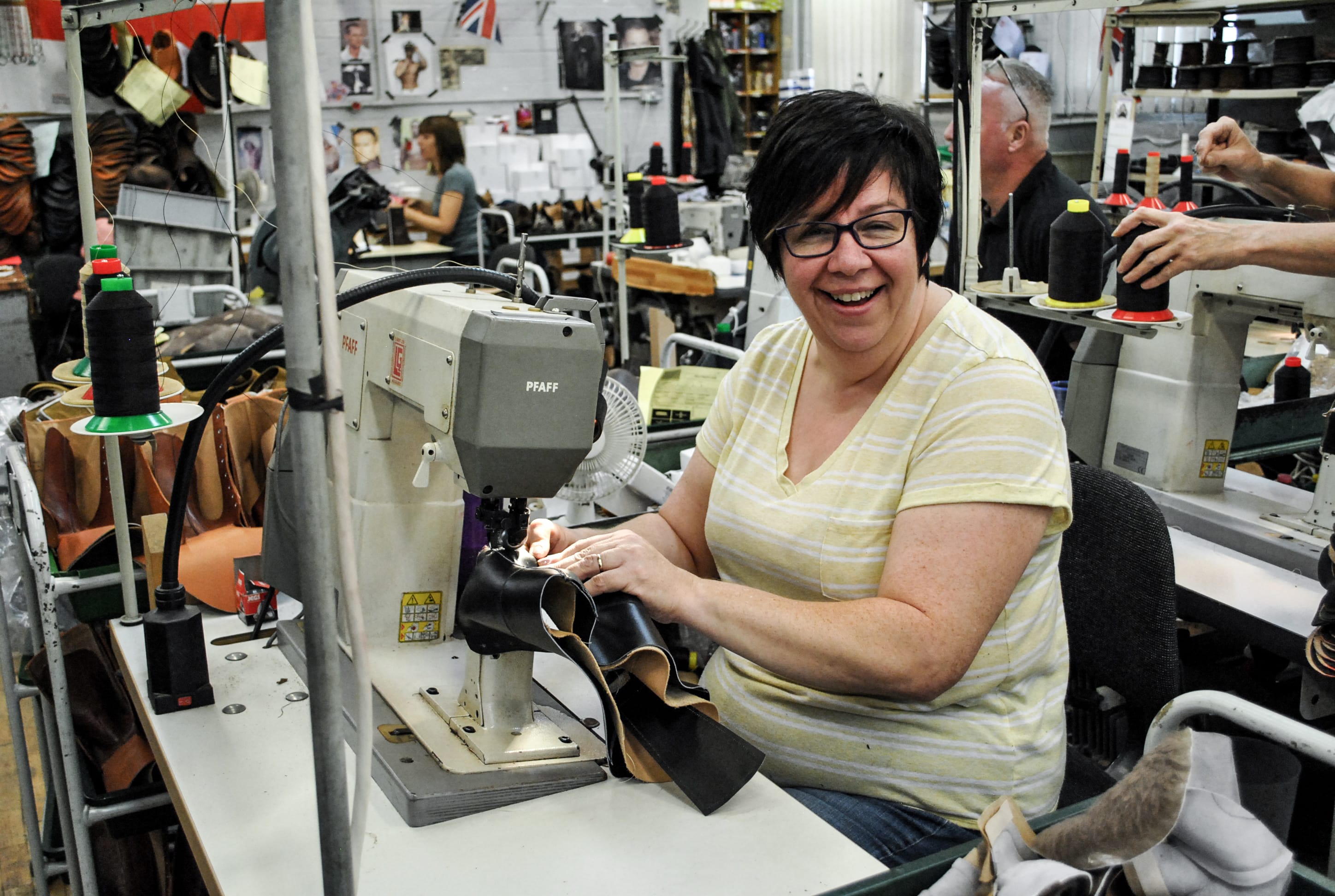 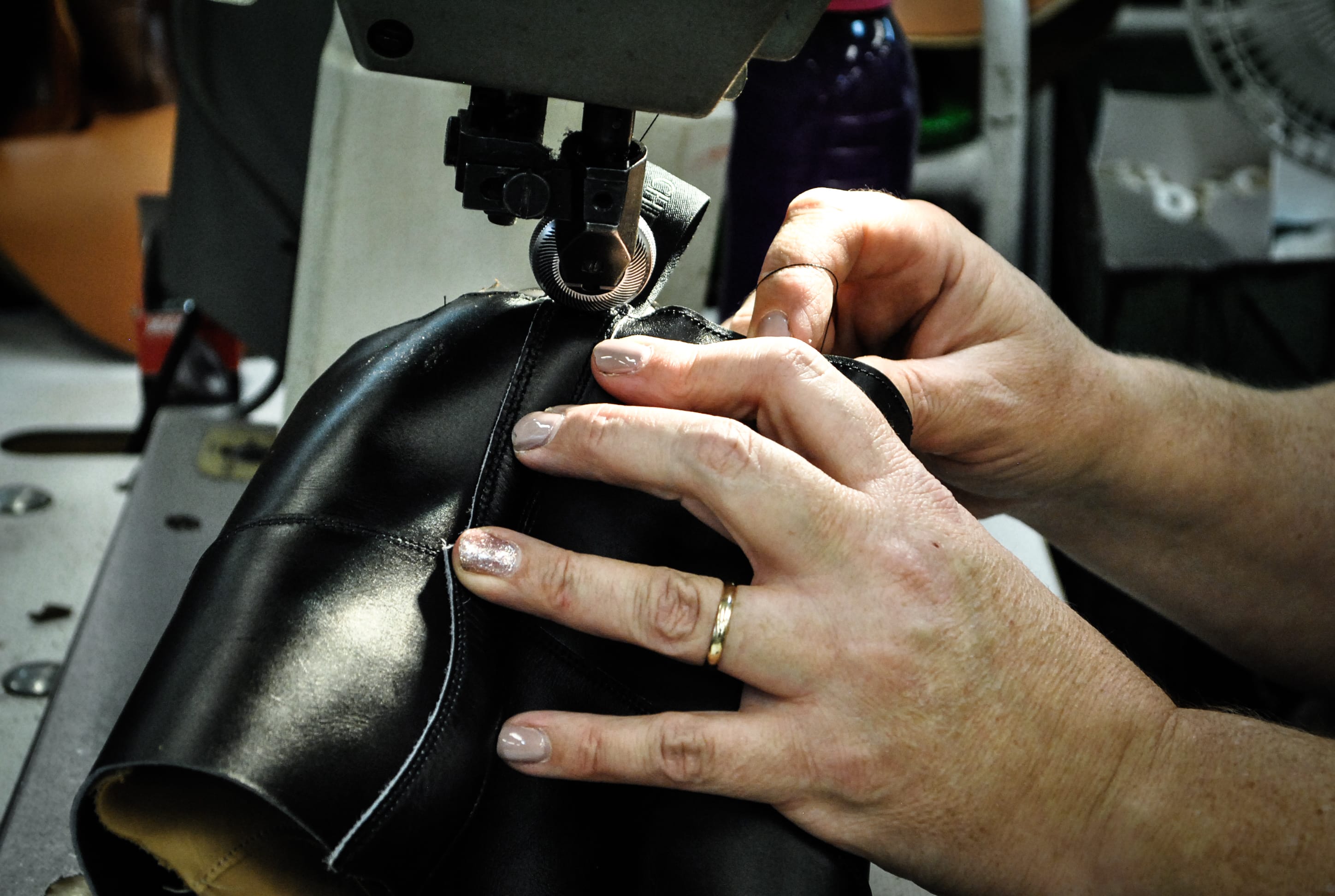 Caroline goes on to say that she started with Cheaney in 1986 and left in 1992 to start a family. Once her 3 children were of school age, she came back and has been here in the Closing room for 19 years.

Have you always been in the Closing room?

Yes, I started on the bench, taping shoes. It wasn’t a particularly skilled job but back then you had to start somewhere and ‘earn your machine’ so to speak. Because there was never a lot of people coming and going, no one really left once they had started so you had to seize the chance to move up when someone retired and that’s what I did, I worked my way up.

Could you imagine yourself doing anything else?

I’m not just saying this because I’m talking to you but I really couldn’t, it’s who I am. I’m not very academic but I’m good with the sewing machine and making things. It’s just what I do and I couldn’t imagine doing anything else.

Do you have any advice you’ve been given that you try to adopt in your work?

‘Keep your head down.’ In fact, no don’t say that because I don’t do it! I’m terrible at keeping my head down, I talk to much to do that.  [laughs]

Why do you think Cheaney is still popular after over 100 years of business?

I think we’ve moved with the times. Certainly when I first started, the styles suited a certain type and age of gentleman but all we did was those styles of shoes, we didn’t do ladies at all. Nowadays, we have lovely ladies shoes, the designs are more fashionable, more modern and detailed and we are selling shoes to all ages now. The younger generations want to buy our shoes and we’re good at making them to the spec they are and I think that’s why we’ve done so well, we evolve.

Finally, do you have any Cheaney shoes?

As I said we do beautiful ladies styles but every time I go to buy myself a pair, I ended up picking up a pair for someone else! My husband has Cheaney’s, my Dad has quite a few pairs and recently I got my son in law who’s in the RAF band a pair. My son also wore them to his wedding, it seems I’ve kitted all the men in the family out but forgotten myself! 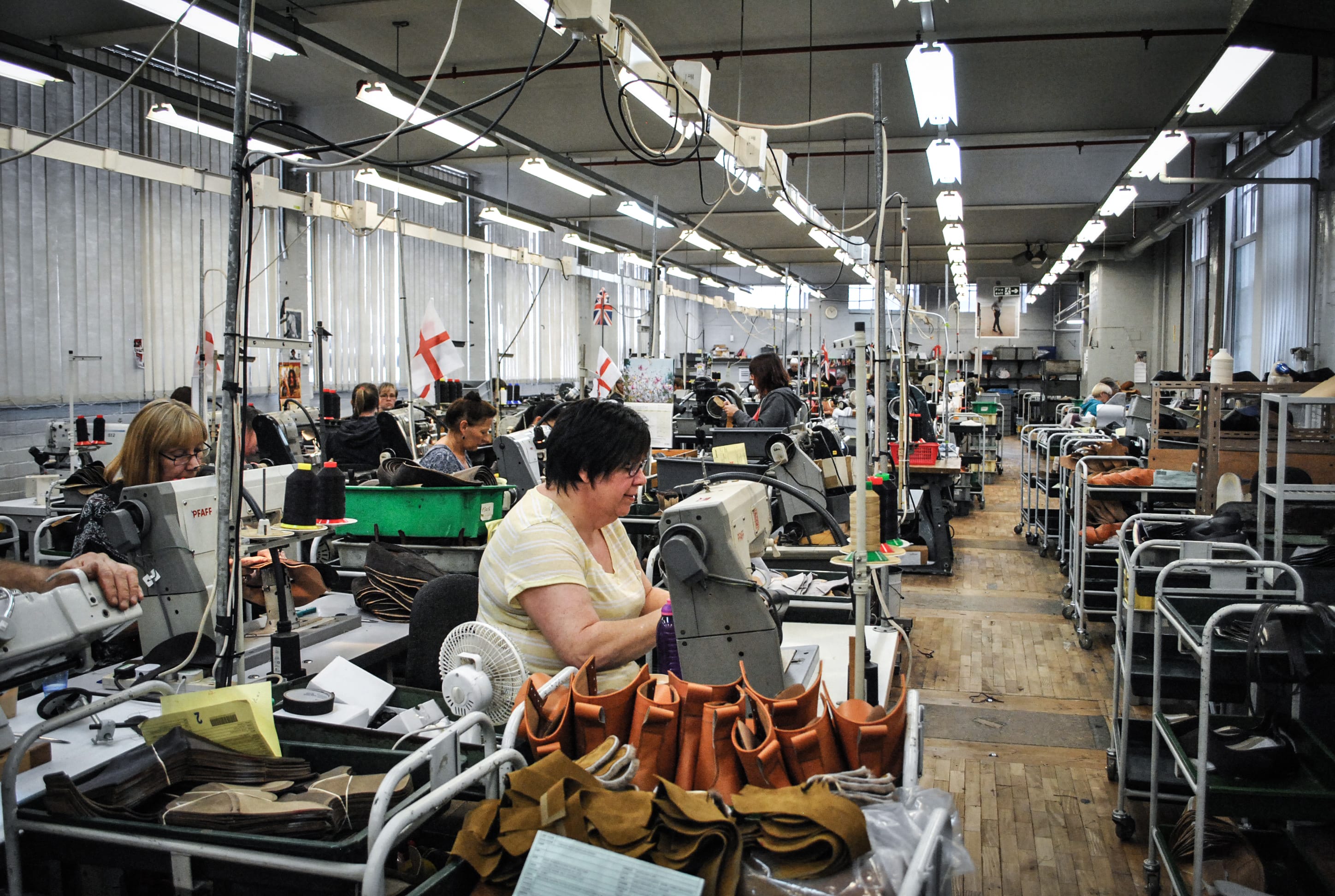 Many thanks to Caroline for taking the time to sit with me today and being an absolute pleasure to talk to.