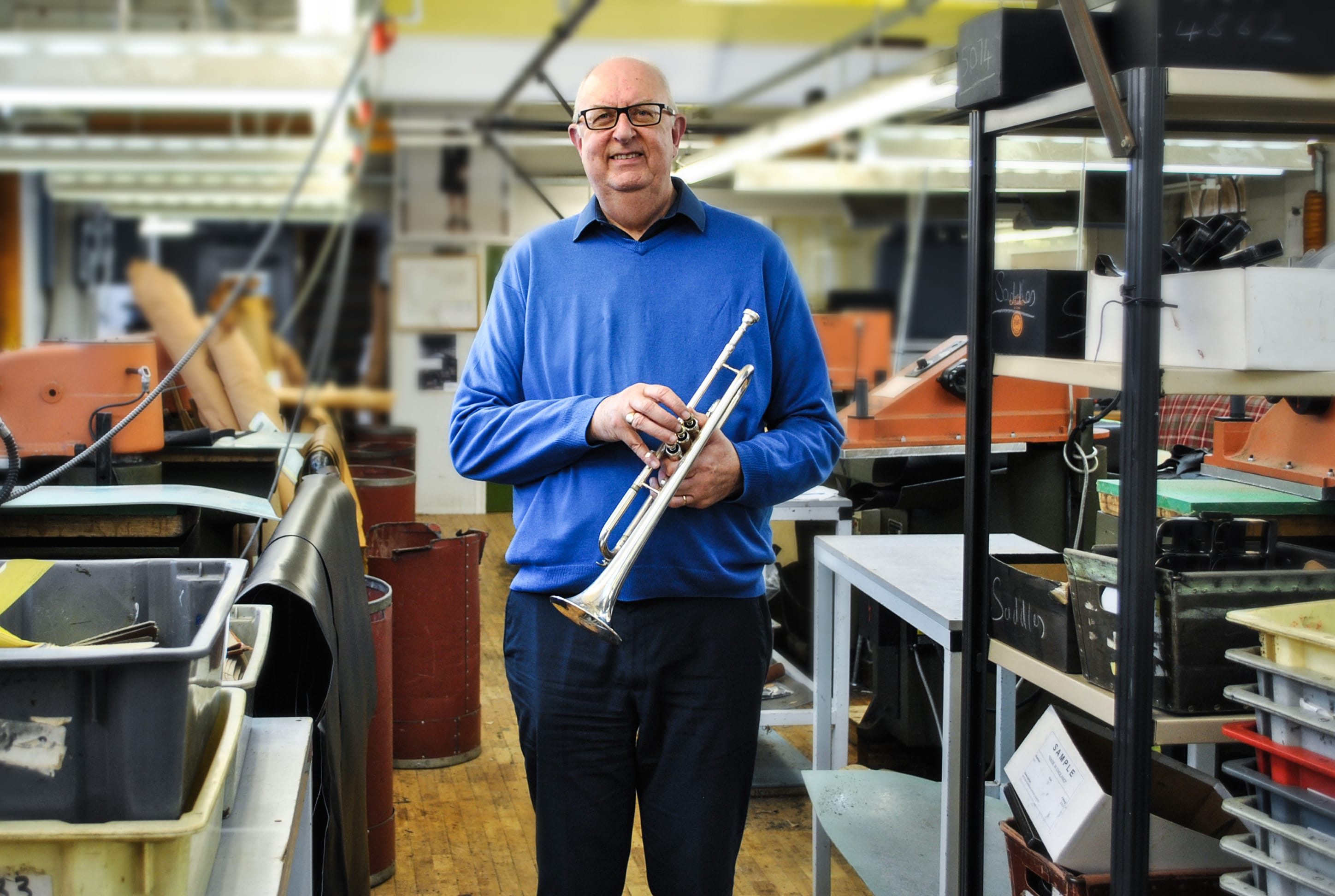 When asking Pre-Production Manager Brian Liepelt if he would like to be interviewed for this weeks’ Factory Friday, his first response was, ‘but I haven’t done my hair!.’ He then tried to charge me £20 an hour for the pleasure of said interview, of which I offered him a cup of tea instead. He very kindly accepted.

What also made a great photo opportunity for me and just so happened to be in the back of his car, is Brian’s trumpet which, incidentally, played a significant role in Brian’s lengthy career in the shoe manufacturing industry… 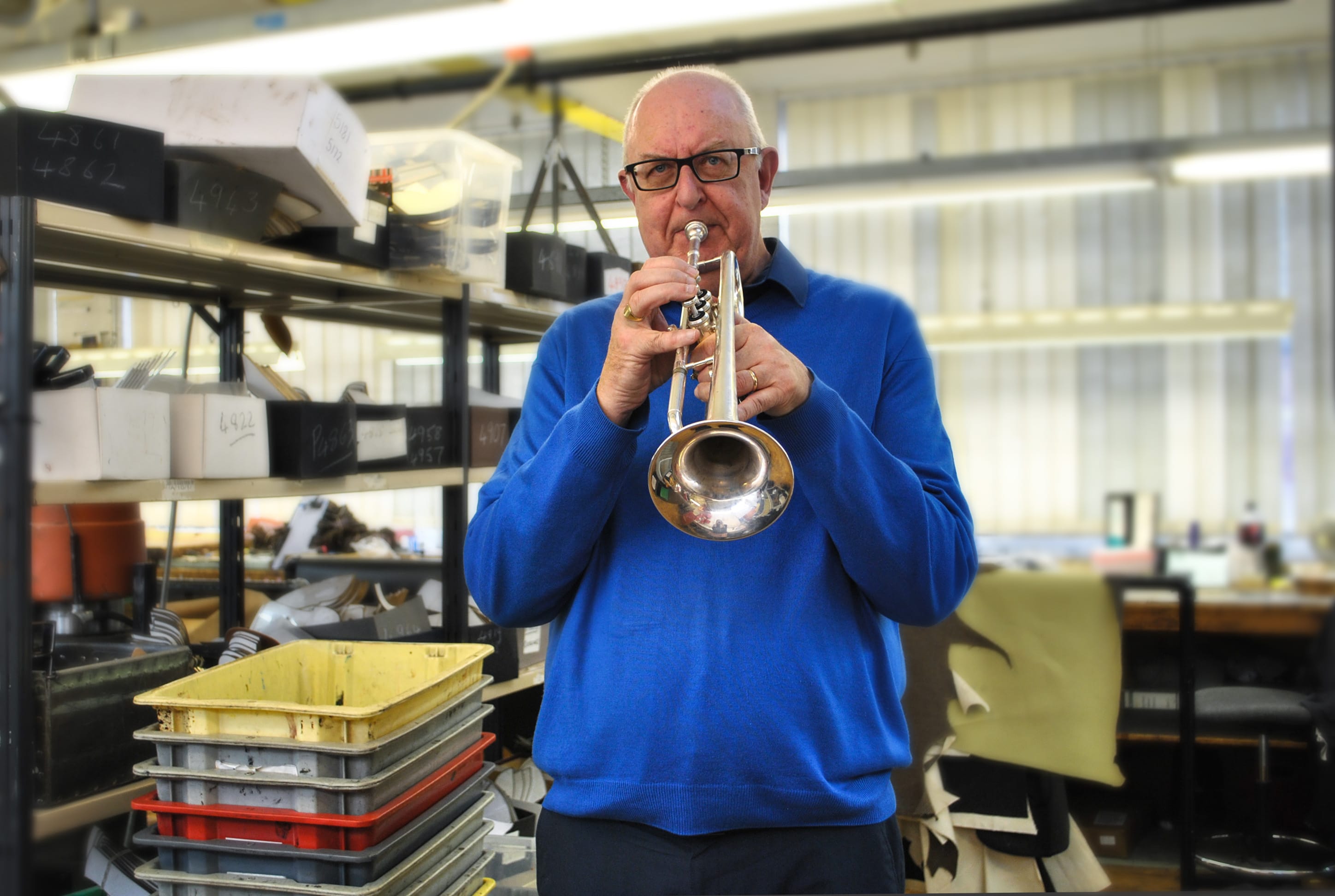 Hi Brian! You’ve been with Cheaney for 20 years but what started your career in the shoe making industry?

I love music and have played many brass instruments, specifically the cornet, for many years now. I wanted to play in the GUS footwear band who were considered at the time to be one of the best brass bands in the world. However, in order to play for them, you had to work for them, so I went to see GUS and was essentially offered whatever role I wanted alongside joining the band.

It may also be just a coincidence but it’s worth noting that some of my family members worked for Cheaney when I was younger, my dad in the making room and my mum and sister in the closing room. Back then, there were 7 factories just in Desborough alone, around 7 in Rothwell and 12 or 13 in Kettering. Many of them were component factories and I remember walking out of the GUS factory and along the road to another factory to drop off some components and then walking back. That’s what it was like then, there were lots of factories around this part of Northamptonshire, many specializing in components so you would just walk along to the different premises. Then of course, they all closed over the years. The strongest still stand, such as Cheaney, but many were left by the wayside or had to close due to components being outsourced overseas. 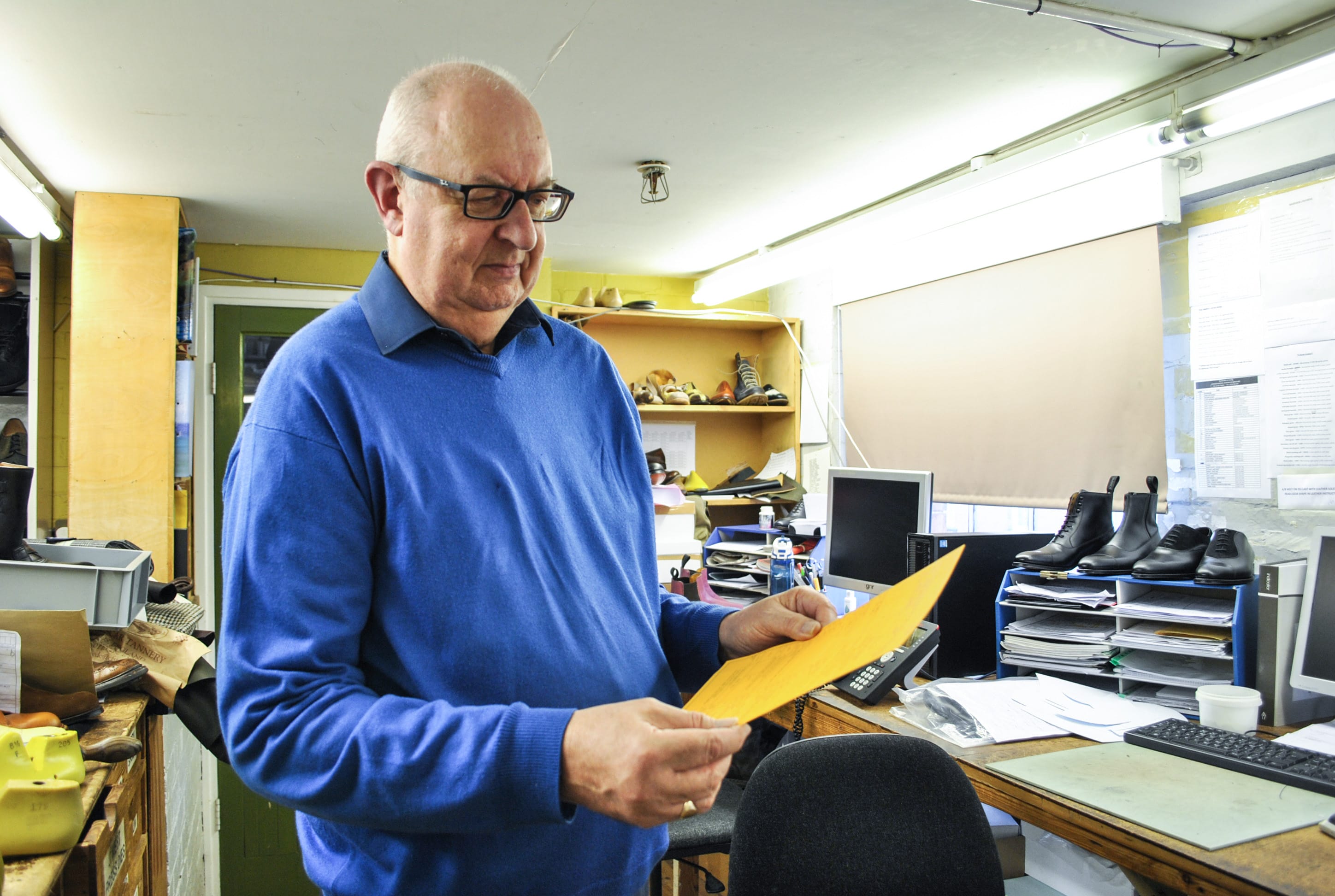 Do you think you would have ended up in the footwear industry if it hadn’t have been for the brass band and GUS footwear?

My music teacher at school encouraged me to join a military band and was keen for to me to pursue music but the offer from GUS was too good to pass up. In some ways, I may have gotten to travel more if I had joined the military and maybe seen a little more of the world but I have no regrets at all.

Why do you think it is that there is still such a high demand for quality, British made shoes?

I think the British made industry has been decimated but only the lower quality brands, the high end brands have endured and actually prospered. The biggest change though has been the fashion itself, the styles are more intricate and striking which is just down to style evolution. However, retail stores have to freshen themselves up more frequently because competitors do and customers expect new products when they re-visit a store, so they have to be seen to be offering something different on a regular basis to keep bricks and mortar premises inviting and fresh. As a business, we do small runs of new, seasonal products because we don’t want to tap in to the fast fashion market as that’s not what we’re about but our traditional, staple footwear pieces that were popular many years ago, are still our staple products that people continue to love today.

As Pre-Production Manager, can you run me through what a typical day looks like for you?

I suppose every day is different really, every day has new surprises shall we say! There are certain things that are routine such as preparing production paperwork for the following week and working on costings and such. I prepare the work tickets which essentially tell the factory what they need to know about a product. The spec that’s detailed on the sheet gives each factory department instructions on their part in the process, such as what eyelets to use, what stitching goes where etc and because of the amount of shoes we make, I go through a lot of work tickets throughout the day! But my favorite part of the job has to be when I get to speak to customers. The customers I speak to usually purchase made to order shoes so we speak on a semi-regular basis and you get to know them, over the years building up friendships and acquaintances and that’s something I really enjoy. 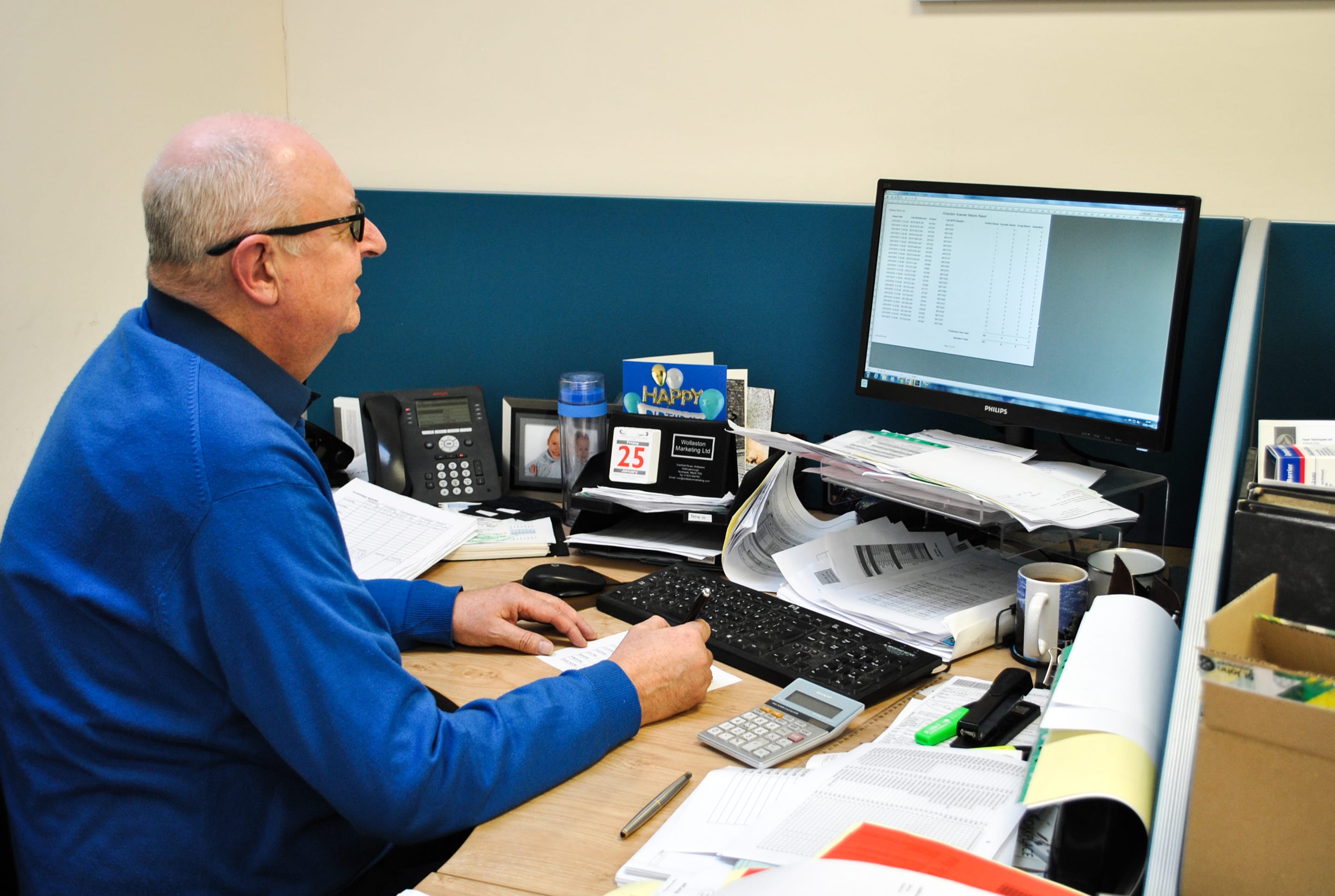 How many pairs of Cheaney shoes do you own and which is your favorite?

I own 7 pairs but I have had a few of them go through the refurbishment service so I can keep wearing them. I’m maybe a bit of a traditionalist and have brogues and toe capped oxfords that I wear for work and music concerts but I’d say my favorite pair that I own are my Tweed boots. I’ve had them for a number of years but they just keep going. 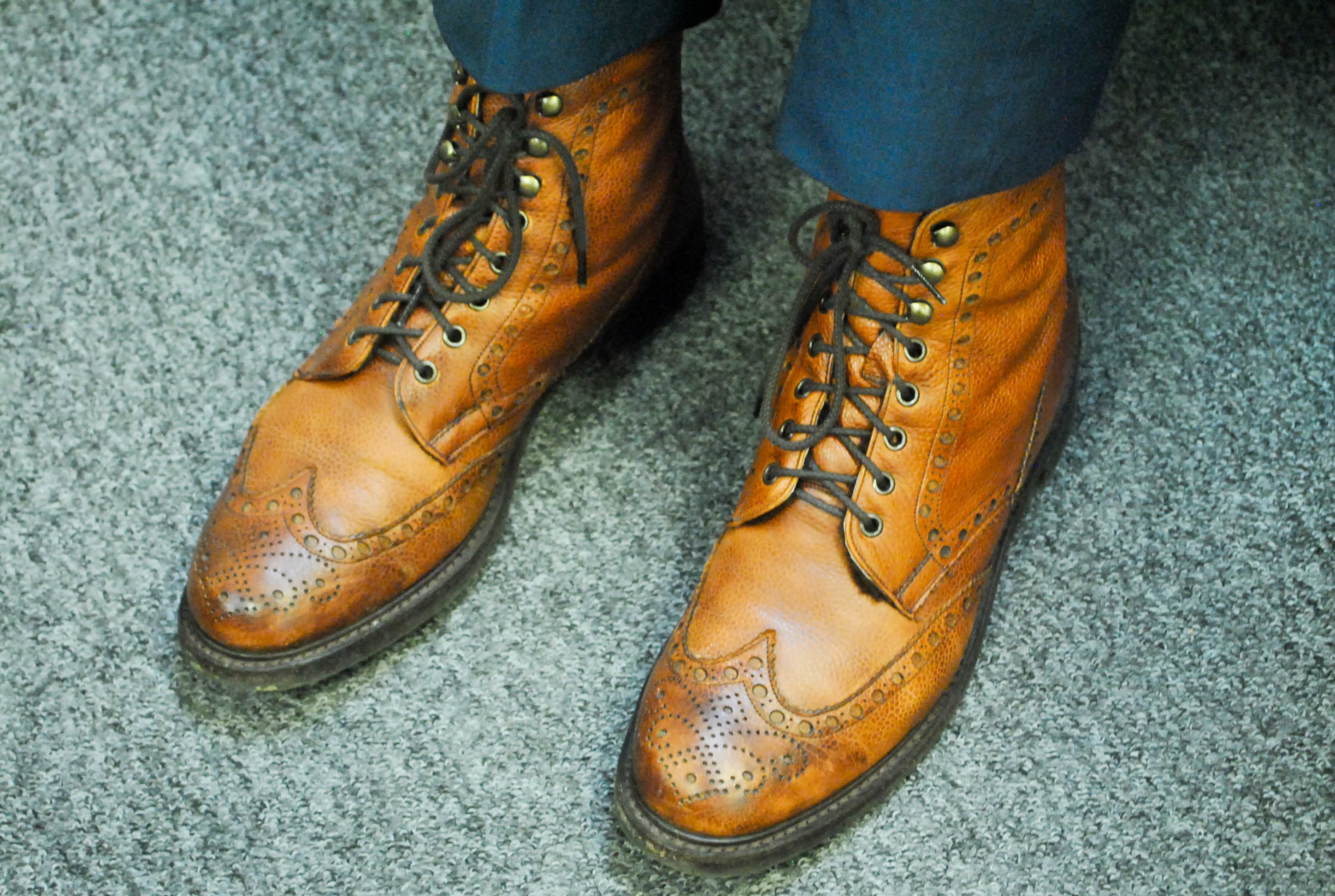 And finally, what’s the best piece of advice you’ve been given?

To listen and learn. You see, no matter how good you think you are, someone will always be better and it’s important to take on board what those people say so you’re continually learning.

Filed Under: The Factory
Factory Friday: Spotlight on Caroline
Generations of Cheaney