A Final Adieu To Marc Debieux 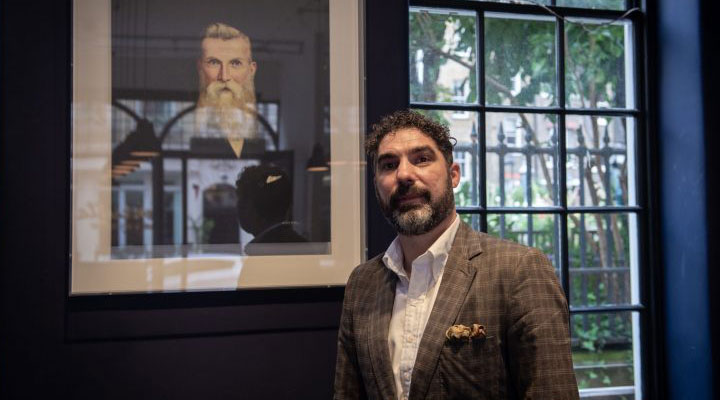 ‘If you could somehow teleport every customer to the factory, you’d never lose a sale. They’d offer you double.’

If you’ve met Marc Debieux, you don’t tend to forget him. He was the man who phoned me to offer me a job at Cheaney, working under him at the shop on Bow Lane before opening the Covent Garden store in February 2017. This is where I meet him to have a chat over two years later, on his last day with the company, to talk all things retail and lifestyle.

Marc genuinely loves what he does. Anyone who has met him will attest to this; his unwavering energy is something that you can’t help but be inspired by, especially to a young and completely inexperienced tyke like myself when I first started. ‘I think we have a social responsibility to share knowledge’, he tells me, ‘all the people who have been massive influences in my life have all given me things to allow me to get to where I am today.’

‘If you’re good at what you do, success is a by-product.’ 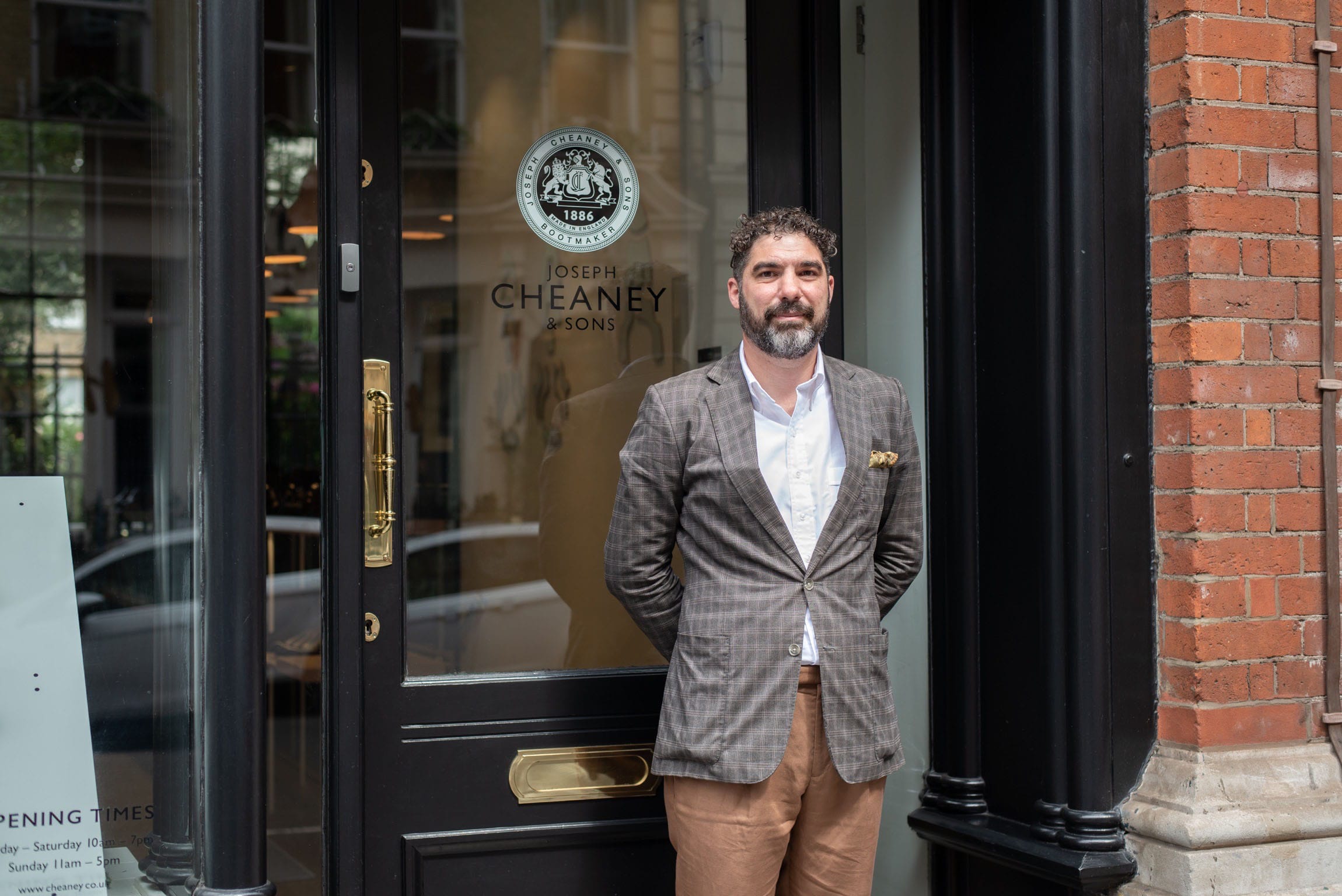 Marc has worked in retail all his life and the shop floor is where he feels most comfortable. He is almost embarrassed to say that his only plan was to be happy, and selling footwear gave him that scope of customer interaction and creativity that he thrived in: ‘I did have a small time away from footwear, but I found it very difficult. There’s very little interaction or rapport when you’re simply escorting people to changing rooms. Only high-end tailoring and footwear allows you to have that one-on-one relationship with the customer’.

His first foray into the world of shoes was at age eighteen, working for Clark’s on Regent Street. Marc admits that he did not excel academically and this job really opened his eyes as to what the rest of London was like, having been born and raised in the East End. He recalls with great fondness going a few doors down to a shop called Berluti, well known for their footwear designs, and marvelling at their displays: ‘on every lunch break I would stare through the window, too nervous to walk in or speak to anyone, but just looking in awe at these exceptional works of art that apparently got worn on your feet developed my love of shoes.’

‘It isn’t just something you wear; it does more than that. It can be an extension of your personality.’ 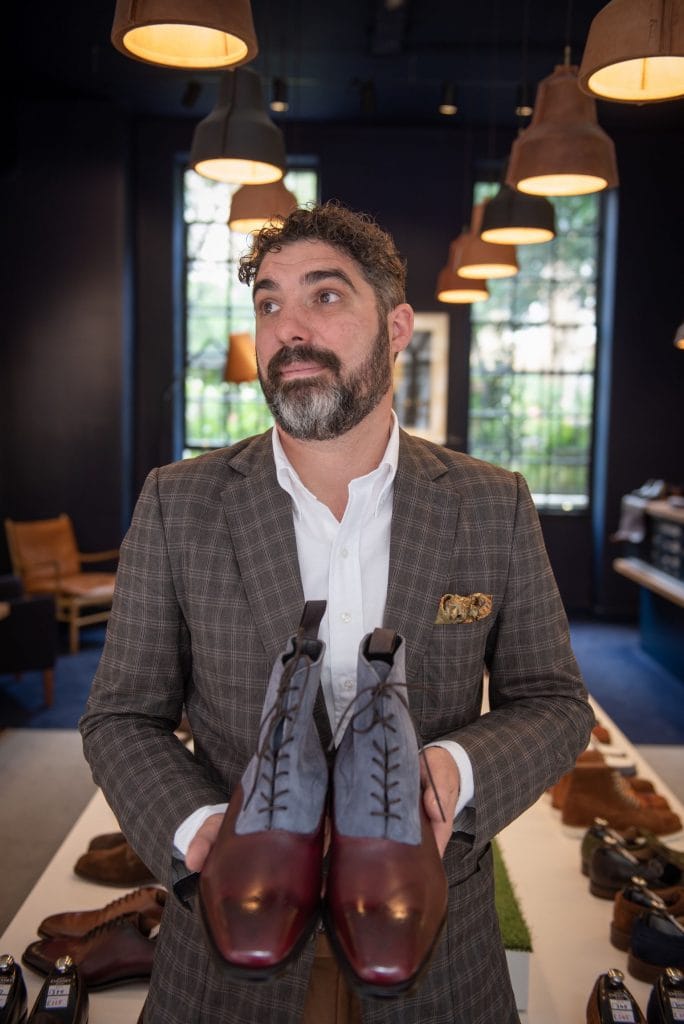 Marc’s custom-made Balmoral boot from our new Imperial Collection, constructed in traditional West Ham colours which he was presented with for his dedication and time with Cheaney Shoes 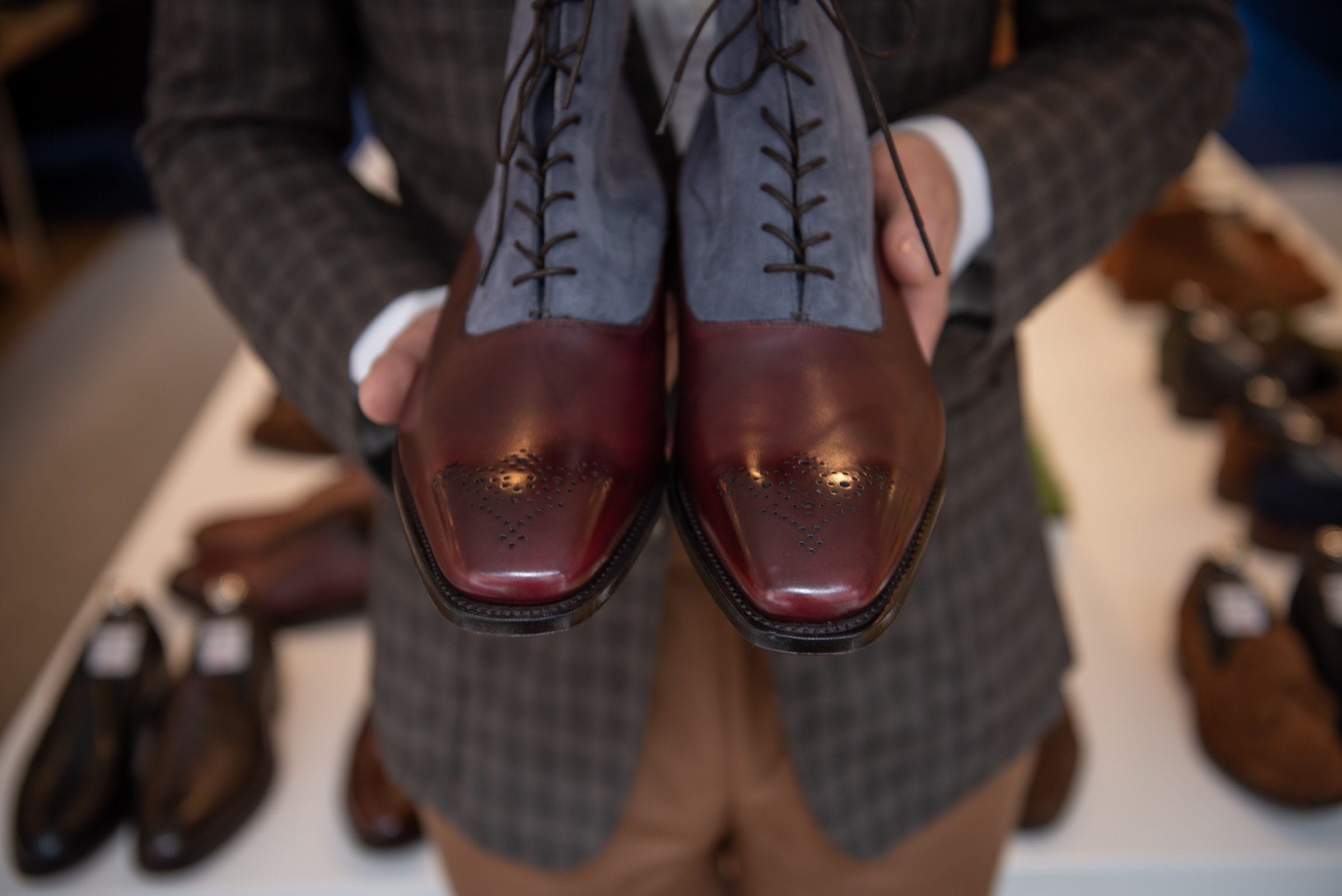 Three years later, after being poached by Russell and Bromley (‘a highlight at the time’, he smirks), Marc met one of his mentors, Mr Katz. Retail worked differently then: managers were referred to by their surnames and people were allowed to smoke on the shop floor. ‘I’m not advocating it,’ he is quick to add, ‘but the service behind it was done in a way that we don’t see much any more – giving someone their own private environment by offering them an ashtray or a drink helps make them comfortable.’

It was here that Marc really started to appreciate the importance of shop experience, something that he still holds in the highest regard today. ‘Experience is everything – people don’t just come to the shop to buy products. When training staff, I put that above all else.’

It was at Russell and Bromley that Marc met his wife, a fellow employee at the time, in frankly hilarious circumstances: ‘I split my trousers whilst serving a customer and she ran next door to buy me a new pair. From there love blossomed.’

‘Ever since then, I massively advocate pleated trousers to anyone who works in the industry.’ 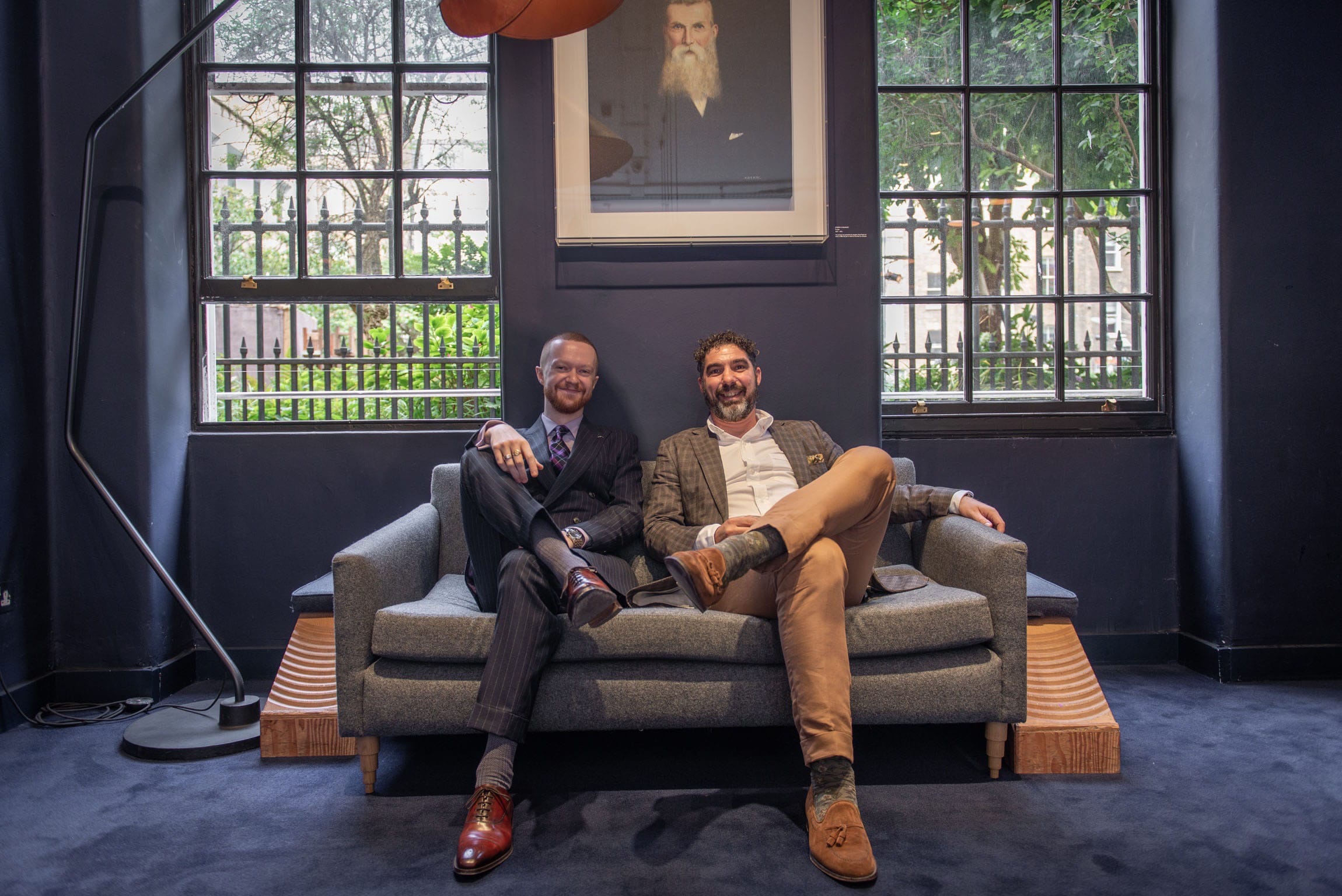 Sitting next to Alex Pardey, who began his journey with Cheaney working alongside Marc before becoming manager of our Lime Street store. Alex will now take over as our manager of Covent Garden

Marc saw his time there as a very structured way of selling, almost scientific – far away from the personalised style that he embodies today. It was when he joined the brand Oliver Sweeney that he met two new mentors who would help shape his own style and methods of working; one such influence was Oliver himself, the other Rod Hardman. The best piece of advice that he gave to Marc was to ‘be more than your brand’ – essentially to make yourself a concierge for the area you’re in. Marc believes that this is one of the most important things that you can do as store manager, making personal recommendations and building that reputation amongst your customers:

‘Selling shoes is essentially the by-product of a conversation, and people love a personal recommendation. I love being sold to, because it means someone cares’.

Something else that Marc picked up from his time there was the importance of developing individuals as individuals. He always told me, when I started working for Cheaney, that he didn’t want me to be another version of him: ‘when training staff, even before the footwear, we encourage the culture of not having everyone the same. As long as you have the enthusiasm and passion, we’ll give you the knowledge’.

Ultimately, Marc’s knowledge and passion comes from a love of talking to people. Anyone who has worked with him on the shop floor, been served by him, or even been for a pint with him will attest to this: the man is unstoppable. Finding someone who genuinely loves what he sells is refreshing in our typically monotonous retail existence.

‘I used to believe that if you can sell, you can sell anything. I can now wholeheartedly say that you cannot. You can only sell things that you love and believe in, otherwise you are that picture of the salesperson that everyone hates, because it’s dishonesty.’ 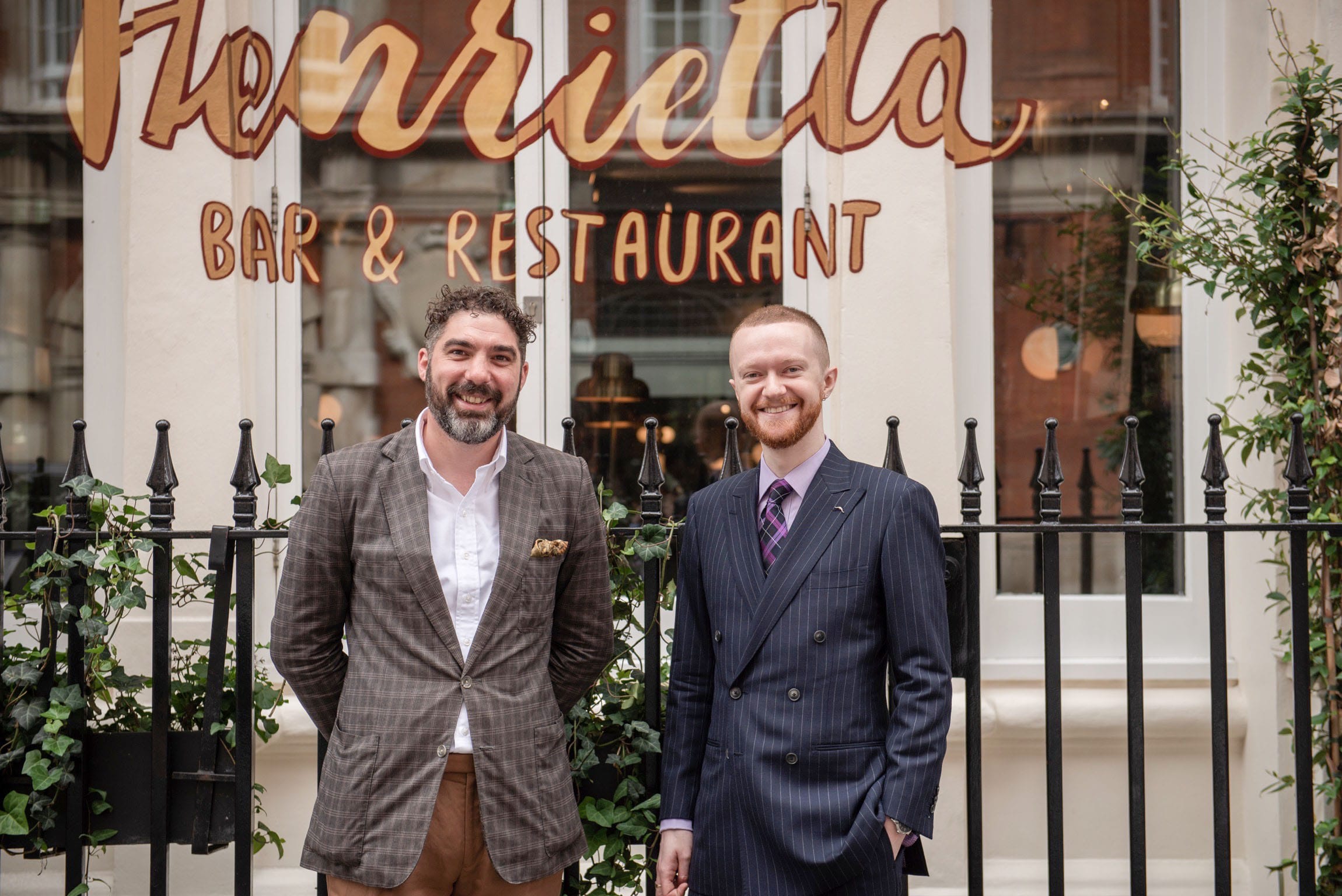 Outside the glorious Henrietta Hotel, a gem within the Garden

This love for the product he sold really came to fruition when he was approached by Metin Tomris, regional manager for Cheaney, to manage the store on Bow Lane in the heart of the City Of London. Marc tells me that from Oliver Sweeney he had learned about design, from Rod Hardman he had learned about people, Russell and Bromley taught him structure, but what he came to realise when working for Cheaney is that he hadn’t learned nearly as much about shoes:

‘That’s the beauty of working for a manufacturer. We have daily contact with our owners, Jonathan and William Church; the wonderful Martin Grey, our head of retail who has a true wealth of knowledge; we can pick up the phone and talk to factory manager Alex Bateman who will take time to take us through the process. You realise how little you know when you actually speak to the people who make them – it’s wonderful how open everyone is. We can only do our magic if we know their magic.’

Marc has a lot of good things to say about Cheaney – which is just as well, as this is an article for the Cheaney blog. However, he has always been an avid believer in the product, believing that everyone should have the opportunity to see and understand the world of English made, Goodyear welted shoes. Heritage brands, although some of his favourites, tend to have the feel of an exclusive club:

‘I believe in being inclusive, keeping the doors open. You don’t know who that person you may have turned away is going to be, or who they talk to.’

‘The reality is that your customer is the most important person in your business. If you listen, they will tell you what the gaps in the collection are.’ 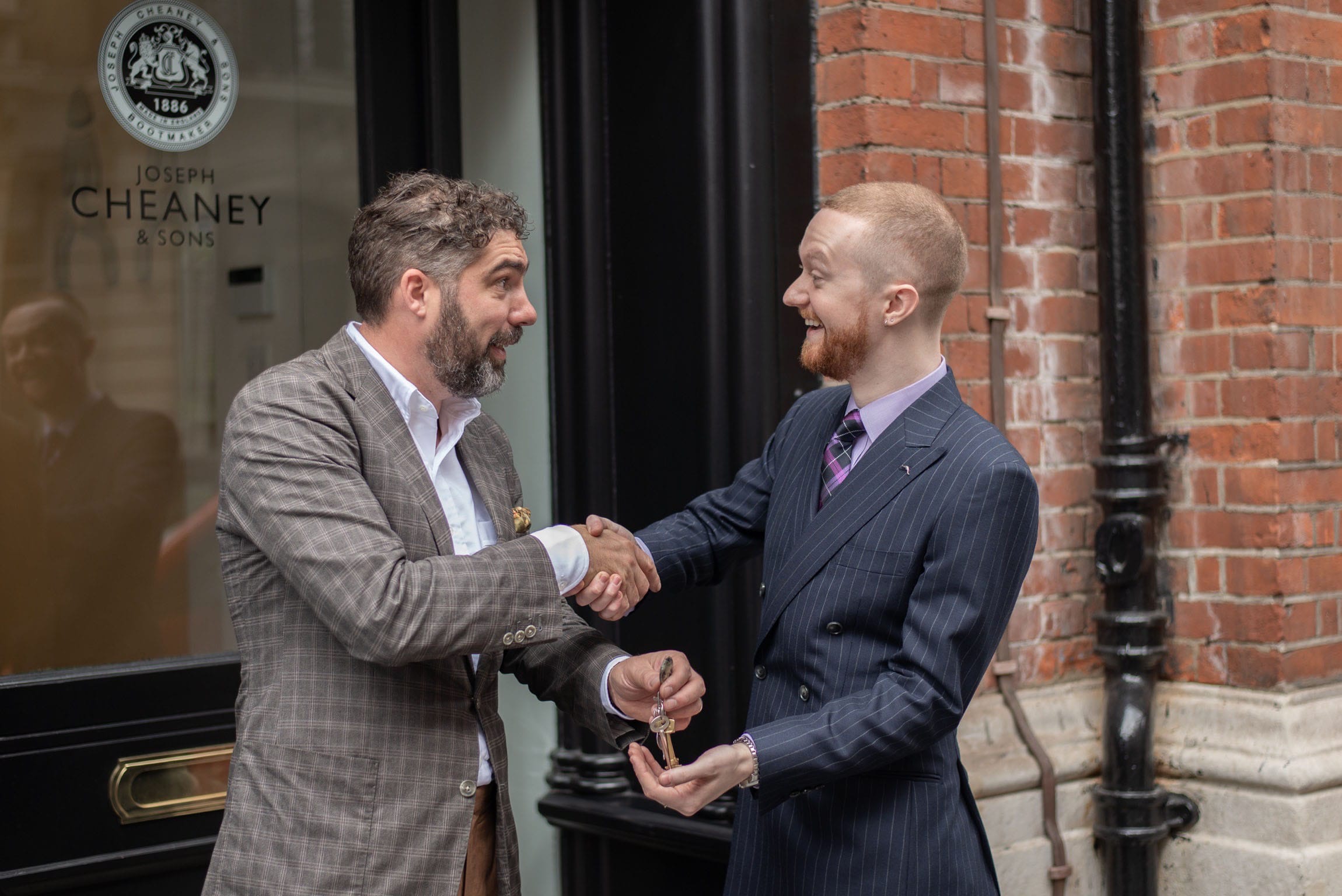 The all-important exchanging of the keys!

After a few years in Bow Lane, Marc was given the chance to spearhead the brand new Cheaney store in Covent Garden, an area which was completely untouched by any other English shoe manufacturer. ‘What I love most about this shop’, he tells me, ‘is that it’s probably introduced the brand to more people who not only haven’t heard of Cheaney, but Goodyear welted shoes in general.’

One area in particular that he was thrilled to see progress in Covent Garden was the growth of our women’s range. ‘Why should there be a compromise?’, he rightly questions, ‘why has it taken everyone so long to think that women wouldn’t want well made, comfortable, English-made shoes that could last a lifetime?’

Can’t argue with that, really.

I’m not writing this blog purely to wax lyrical about my old manager, as easy as that would be – Marc gave me so much quotable material during our chat that this article essentially wrote itself. I just added punctuation.

After six years with us, he is leaving London to start a new life with his growing family in Norwich, working for slipper manufacturer Bowhill & Elliott. At the risk of sounding like an episode of ‘This Is Your Life’, I ask him what he is most proud of after his time with us. His pride in his work is obvious: ‘I want to celebrate what I do. What I love most about my job is that I can dress like I’m going to a wedding every day’.

However, what gives him the most satisfaction is seeing the amount of people that he has worked with progressing well in their careers. Marc is a man who has always invested time into his staff, after seeing the benefits from his mentors when he started. To him, it would be an injustice to have learned so much and not pass it on. 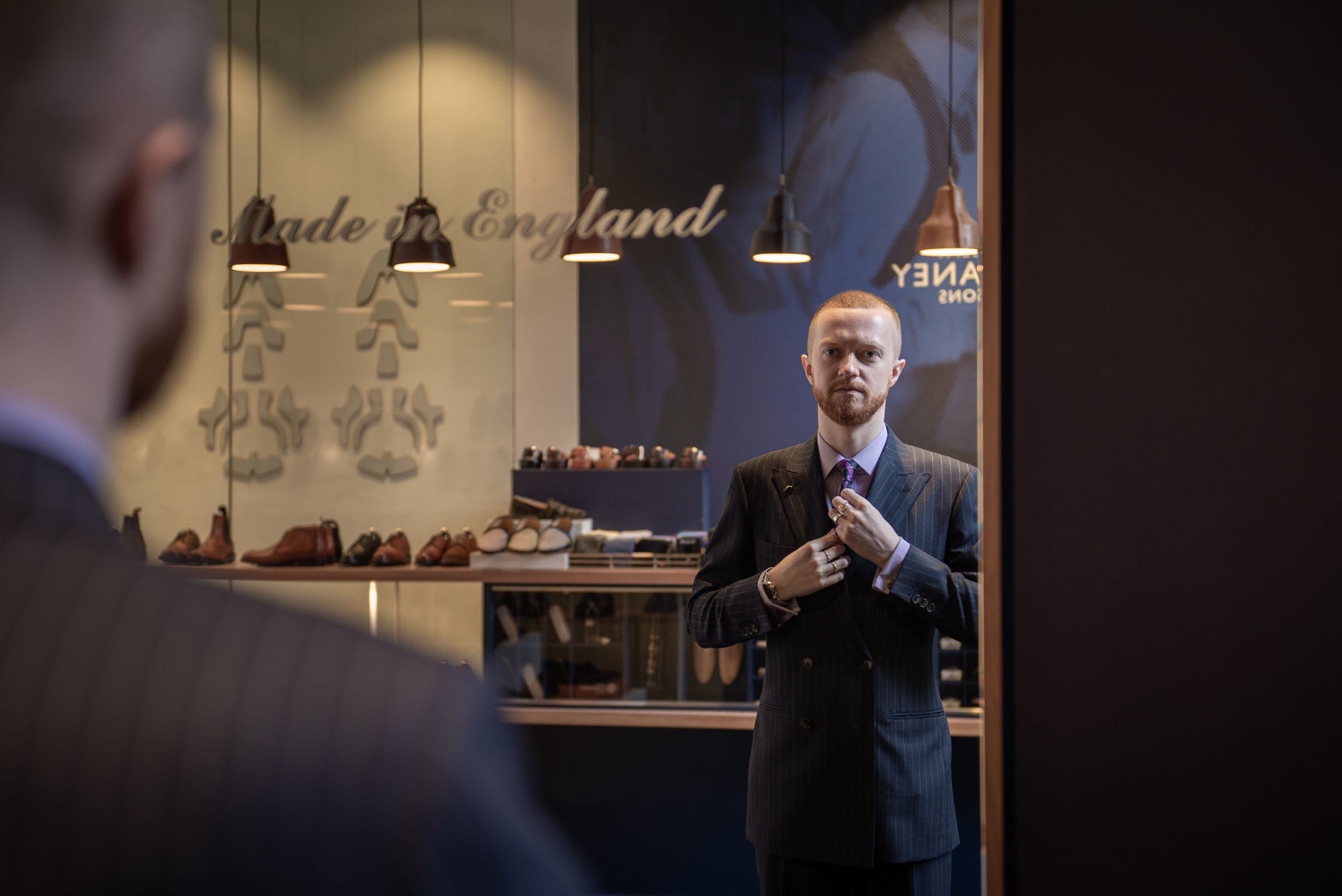 Having been in London all his life, there is a certain element of trepidation mixed with excitement about the prospect of moving away completely. However, in our current social-media-led world, we can always follow his adventures as ‘a fish out of water’ via Instagram, @beardedbuffer.

‘The great thing about London is that it can offer you a new experience every day of the week. But Norwich has hundreds of restaurants and over 350 pubs.’

Alex presiding over his shoe empire

Once again, we’d like to thank Marc for his dedication, his passion and his tenacity over the past 6 years. Moreover, Marc is an exceptional chap, whose personality far outshines the many shoes he has buffed and who we wish the very best of luck to on his new adventure. We will miss you Marc! – Cheaney HQ